How Does a Grid-Tied Solar System Work? 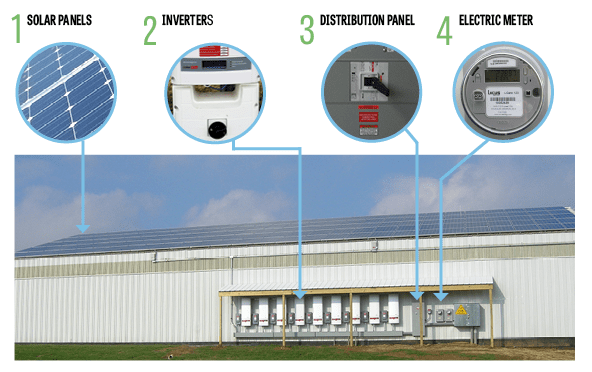 A solar energy system can transform energy from the sun into electricity. With the proper setup, the electricity your solar panels generate can be used just like any other type of electricity. It can power your home, business, or farm for free, and it can do so without any emissions.

But how does a solar panel take something as ordinary as sunshine and turn it into something that can power our 21st-century lives?

It’s a relatively simple process and setup, and we’re here to explain it.

How Do Solar Panels Work?

Solar panels absorb sunlight and turn it into electricity. Their ability to do this is in part due to their composition. Each solar panel is made up of several layers.

The top layer is made up of glass. This glass is clear enough for sunlight to pass through but is strong enough to keep the layers below safe. Below that lies an antireflective coating and contact grid.

Then, we get to the electricity-producing portion. 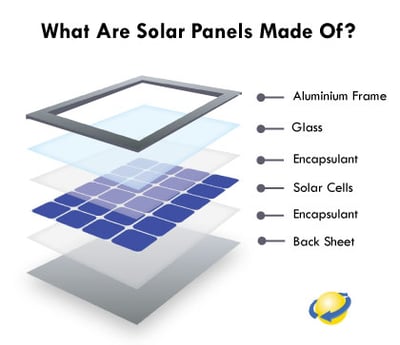 Next lies two layers of semiconductor silicon. Arranged in several solar cells, the silicon absorbs sunlight, or more specifically, photons. Photons, which are particles of light, push electrons from their atoms, causing them to move around through a positive and negative charge. This movement of electrons creates a flow of direct current or DC electricity.

The layers of silicon are sandwiched between two layers of encapsulant to keep everything together. On the bottom is a backing layer to keep the inner portions safe from the elements and an aluminum frame wraps around the edges.

The panels’ performance, or how much electricity it can generate, is dependent on a few different factors, like how much sunshine the panel receives, the temperature, the installation method, the panel’s cleanliness, and more. The make and model of your panels will also impact production so selecting high-quality solar panels for your project is important.

The Other Components of a Solar Energy System

While solar panels are the most visible component of a solar system, they alone can’t turn sunlight into electricity.

There are three other main components that are key in understanding how solar panels produce energy.

There are two types of electricity: DC or direct current, and AC, or alternating current. The vast majority of the power we use is AC. 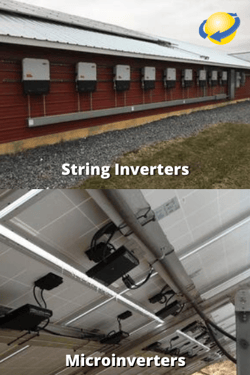 An inverter’s job is to convert the DC electricity produced by the solar panels into the AC electricity we can use.

Depending on the size of your solar system, you may only need one string inverter, or you may need several. With microinverters, you’ll need one for each of your solar panels.

When the distribution panel diverts the extra electricity generated by your solar panels to the grid, the utility company needs to compensate you for that electricity. Likewise, when you use electricity from the grid, they’ll need to charge you.

But if you have solar panels, why do you need to draw electricity off the grid?

In short, the utility grid can act like free energy storage, keeping your solar-generated electricity safe until you need it.

Transferring Power to and From the Utility Grid

If you have a grid-tied solar system, any extra power that’s generated will be transferred to the utility grid.

In exchange, your utility will compensate you for that electricity. This exchange takes place through a mechanism called net metering.

While the majority of states do offer net metering, it’s not offered across the country. Some states will only compensate solar producers at the production rate of electricity, not the retail rate. That means electricity you draw from the grid will cost more than the value of electricity you upload to the grid.

Some states, like New York, have a unique method of compensation. With New York, their VDER Value Stack determines the value of solar energy based on several factors that can fluctuate with time of day and location, instead of compensating solar producers at the retail or production rate.

How Do Solar Panels Work When There Is No Sun?

A solar energy system only produces electricity when the sun is shining. But we need electricity all the time. So how do solar panels work at night and on cloudy days?

If you’re looking to offset all or a large portion of your energy usage with solar, your installer can design a system that produces enough energy to do just that. However, it’ll have to produce enough energy when the sun is out to make up for the energy you use when the sun is not shining.

That extra electricity gets sent to the grid and can draw on anytime whenever it’s needed. That’s why grid-tied solar systems will always have access to electricity, regardless of the weather or time of day. As long as the utility grid is working, you can access power.

Off-grid systems will have to rely on energy storage. While solar batteries are becoming more and more accessible, a large enough battery system to provide backup power for an entire house or business would be cost-prohibitive for many. That’s why grid-tied solar remains the most popular way to go solar, as you’re getting dependable energy storage for free.

Batteries are also an option for grid-tied solar systems. Here's a guide to help you decide if batteries are worth it for your home or business.

A Relatively Simple Setup for a Magnificent Result

Solar power enables us to turn raw energy from the sun into cost-free and emissions-free electricity.

With just four main components, something as ordinary as sunlight can be used to create the electricity that charges our cell phones, keeps the lights on, and powers our appliances.

And with a grid-tied system, you can use solar technology to power your house with emissions-free solar energy on overcast days and through the night.

Ready to learn more about solar energy? Download our in-depth solar buying guide or visit our other educational blog posts to learn the ins and outs of solar energy.