What Kind of Solar Inverter Do I Need? 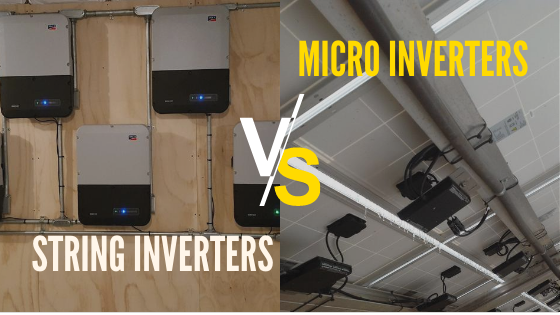 Inverters are an essential component of a solar system. These complex bits of technology are what turn the raw DC power generated by your solar panels into the electricity you can use at your business, home, or farm.

They’re also the part of your solar system that’s likeliest to fail first. Because of that, the type of inverter you choose to have installed on your solar system is an important decision. You want an inverter that maximizes your system’s production while also having a low failure rate and a good warranty.

In this blog, we’ll share the information you’ll need to help make an informed decision regarding which kind of inverter is the best for your solar system.

The Three Types of Solar Inverters

When you boil it down, your decision comes down to which of the three inverter types you see as being the most beneficial:

Before we get into each type, we want to touch on the main differentiator between them: converting DC electricity on a string level or converting on a panel level.

With string inverters, the electricity produced by entire groups, or strings, of your panels are converted together. On the other hand, string inverters with optimizers and systems with microinverters offer module-level optimization, which means the power from each individual solar panel is converted separately. Microinverters do this by converting power from DC to AC for each module, while optimizers are essentially a DC-DC converter that allows the power from each module to be harvested separately.

Each type has its own pros and cons, which you should weigh against one another to make your decision.

String inverters tend to be the most affordable option. Some smaller commercial systems and some residential systems may find the more expensive microinverter to be worth the increase in price. However, this is often not the case on larger projects.

String inverter technology has been used since solar energy’s early days, lending credence to its reliability. However, failure rates will vary from brand to brand.

At Paradise Energy, we most often offer SMA string inverters. With nearly 40 years of inverter design and manufacturing under their belt, they not only have the experience to ensure they’re producing a quality product, but they also have financial stability. That’s important because financially stable companies are more likely to be around to honor their warranties.

Out of the gate, SMA inverters come with a ten-year standard warranty, with the option to extend it for five or ten years. For 2020, SMA has updated its residential inverter line to extend the standard warranty to 15 years at no additional cost! 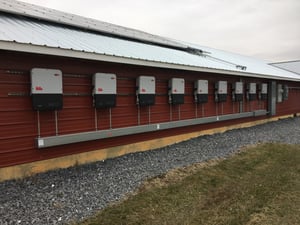 With string inverters, all of the equipment is located on the ground level, whether your system is installed as a ground mount or a roof mount. While many solar inverters are reliable and can fall under warranty for 20+ years, they are the piece of your system likely to have problems first.

Because of that, ground-level equipment makes it easier for operations and maintenance (O&M) teams to access your system in case anything goes wrong. There’s no need to get up on the roof and remove solar panels to get to the root of the issue, as there would be with microinverters.

While ground-level technology is preferred from a maintenance standpoint, it may not be so from an aesthetics standpoint. While they’re not particularly large (a little smaller than the size of a standard residential electrical panel), string inverters will take up space somewhere on or in your home or business. And if you have a large system, you will need more than one inverter.

Depending on how streamlined you’d like your system to look, or whether or not you have a good place to install the inverter(s), microinverters may be your preferred option.

For example, say there are four solar panels in a string. A nearby tree shades half of one of the four panels for a few hours a day, while the remaining three panels are in full sun. With a string inverter, all four panels will be limited to half production while that one panel is shaded. This only applies to panels in that string. There can be more than one string connected to one inverter. 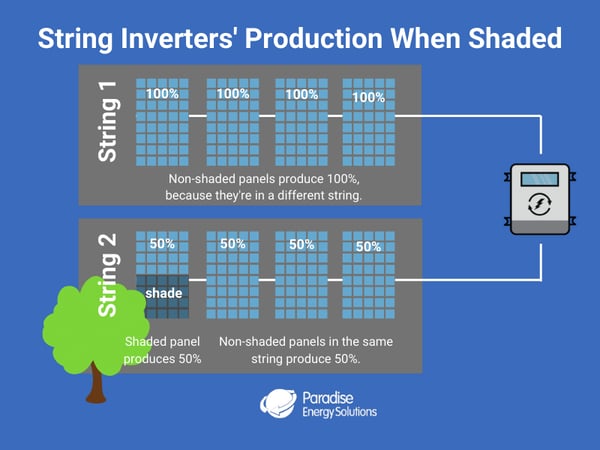 So the roof where your solar system will be installed is partially shaded, you may want to reconsider going with a string inverter, depending on the size of your system, as you could lose out on some electricity. 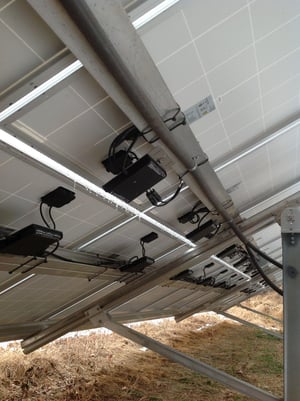 Compared to string inverters, microinverters are a newer technology. This doesn’t necessarily mean that they’re less reliable, but there will be more of them up on your roof, which means more opportunities for failure.

At Paradise Energy, we offer mostly Enphase microinverters. Over the years, Enphase has greatly improved the failure rate of its microinverters. They’ve worked to simplify the design and reduce the parts counts, giving less opportunity for something to go wrong.

Additionally, Enphase microinverters are back by a 25-year warranty - the most robust in the solar industry.

String inverters are easy to access for maintenance because they’re located at the ground level. But with microinverters, this isn’t the case. Each panel has a small inverter tucked underneath. That means if they’re having problems, your maintenance team will have to get up on your roof and remove panels to access the inverters that are having issues.

Microinverters eliminate the need to have a string inverter somewhere inside or outside your building. About the size of an internet router, a microinverter is neatly tucked under your solar panels out of sight. However, microinverters will require a combiner box at ground level.

One of the biggest benefits of microinverters is their ability to convert DC electricity to AC electricity for each individual panel. That means if just one of your eight solar panels is half-shaded, only the shaded panel’s production will be limited, and the other seven panels will produce full electricity. 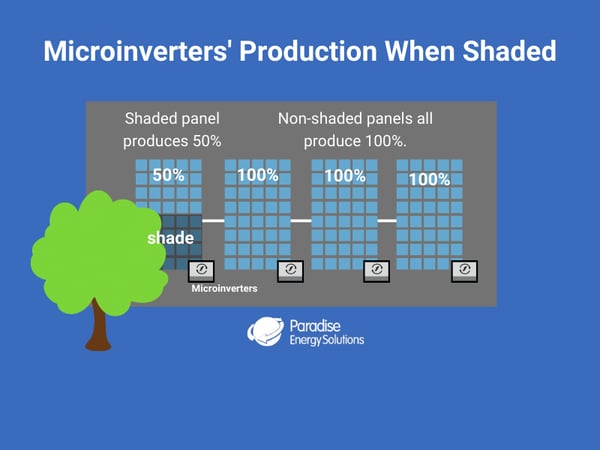 Depending on how much shade your roof has, this may make microinverters the better choice, even if they are more expensive than a string inverter initially. They’ll also offer module-level monitoring, meaning you can see how much electricity each solar panel is producing on your monitoring software. With string inverters, you’ll only be able to see how much electricity each string is producing.

Optimizers are small devices that will be installed underneath each panel, similar to microinverters. But instead of converting the sun’s power from DC to AC right at the panel, they’ll send it to the string inverter.

Power optimizers are reliable, well-designed pieces of equipment, which are backed by the reliability of string inverters.

Power optimizers are a hybrid of ground-level and roof-level technology. While the string inverter will be located at ground level, the power optimizers will be installed underneath each solar panel.

Should something go wrong with the power optimizers, your maintenance team will have to get up on your roof and remove panels to get to them. However, if something goes wrong with the string inverter, they’ll be able to troubleshoot and fix the inverter without removing panels.

Unlike microinverters, which tuck away the inverter equipment underneath the solar panels, power optimizers still require a string inverter or inverters at ground level somewhere on your property. However, they do offer increased production on a shaded roof for less than the cost of microinverters.

The power optimizers will allow each solar panel to contribute power based on how much each panel is actually producing, as opposed to the lowest-producing panel in the string. They will also give you a deeper look into your solar system with module-level monitoring. 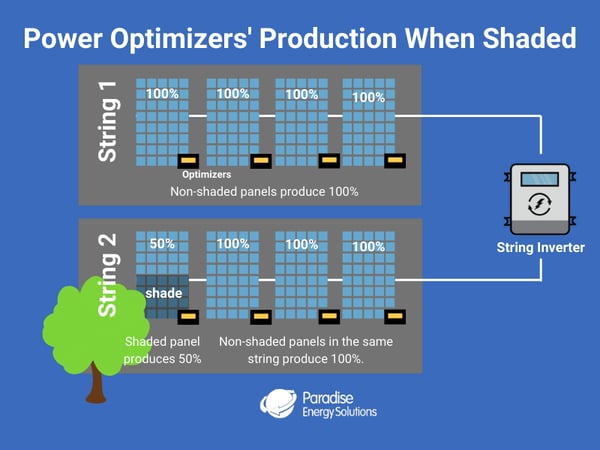 What Type of Solar Inverter is the Best?

It really comes down to your specific solar project and your goals for that project.

If you’re installing a system that’s 20 kW or more, string inverters are probably your best bet, as they’re the most scalable option. If you have a typical-sized home and have some shading on your roof, microinverters or solar optimizers may make the most sense.