Are Solar Batteries Worth It? 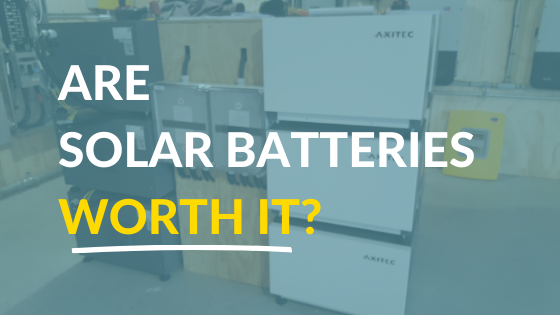 There’s no way around it -- a solar energy system requires a significant upfront investment, though it can save you a substantial amount of money in the long term. Adding batteries for solar energy storage on top of typical installation costs will increase the price further. So is it worth it to get a solar battery?

Many of us saw the headlines and news stories of the historic grid outages that plagued Texas in the winter of 2021 and thought “what can I do to make sure that never happens to my family?”

Depending on where you live, prolonged power outages aren’t something we typically experience, thus aren’t something most American homes are prepared for. But as harsh winter storms and extremely hot summers strain electricity grids, and severe hurricanes and massive tornadoes create disastrous scenarios, it seems the chances of experiencing a long-term grid outage are increasing. It’s crucial that we consider how we can prepare.

A grid-tied solar system itself won’t be able to power your home when the grid goes down. But with solar-energy-backed batteries, you can tap into the power generated by your system at any time. Batteries can turn your solar system into a reliable power source in prolonged outages.

While others are at the mercy of the utility repairing the damaged or overloaded electricity grid, you can keep the lights on thanks to your stored energy. 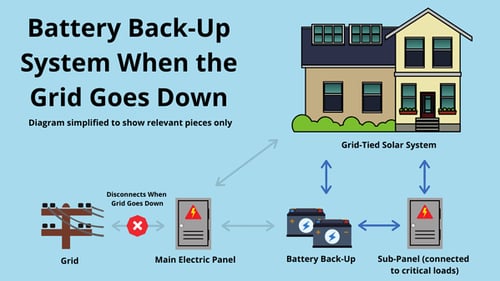 Many people depend on a gas-powered generator to get them through a power outage. These can be a good, low-cost option. However, they’re not foolproof.

Because generators depend on a limited fuel source, finding the gas to power your generator in a prolonged power outage can be difficult, if not impossible. Gas pumps need electricity to distribute gas, meaning if their generators stop working, no one can access the fuel for their generators.

Additionally, natural disasters and other emergency situations can cripple infrastructure, making it impossible for fuel deliveries to make it to the affected area in a timely manner.

Solar batteries, however, are not dependent on an in-demand commodity like gas. Solar panels can generate power at nearly any temperature, hot or cold, so long as the sun is shining.

Even if it’s cloudy or partly cloudy, your panels can still produce some electricity. A good rule of thumb is that as long as objects cast a shadow, there’s enough sunlight to produce electricity.

With solar batteries, you’ll never have to worry about your community running out of fuel for a backup power source. And because sunlight is free, you won’t have to shell out tons of money to keep your lights on.

Electricity may seem like a modern convenience that we could survive without for a few days should we have to. After all, just 100 years ago, less than half of American homes had electricity. But life is so different now that our homes simply aren’t prepared to handle prolonged outages. What once was considered a luxury is now essential.

Most of our homes aren’t set up with a wood-burning stove or an alternative heating source that can keep things at a reasonable temperature. We’re not equipped with enough candles or flashlights to illuminate the dark for several nights. We depend on electricity to keep our food from spoiling and to cook it.

Going without power for several days can mean more than just not being able to watch TV. There are many essential, life-sustaining activities we need power for. And with so many of us now working from home, a dependable backup energy option can help us keep working.

Having a dependable, renewable source of electricity that is sized to cover your essential loads during a prolonged power outage can help you take care of yourself and your family.

The Downsides of Solar Energy Storage:

The Cost of Solar Batteries

While they continue to decrease in price, the fact still remains that solar batteries are relatively expensive. As a general rule of thumb, you could expect to pay about $11,100 for a 9.8 kWh battery after incentives.

That said, the peace of mind that comes with always having a dependable, independent backup energy source can certainly be worth the additional cost. And because your battery is powered by free solar energy, you won’t have to dish out tons of money for gas to power a traditional generator.

It only makes sense to backup your critical loads, in most cases

It will only be prudent for most American homes to install enough solar batteries to power the essentials. Because of the price associated with solar storage systems, installing enough batteries to meet 100% of your typical energy needs would simply cost too much.

Instead, you’ll want to work out what’s known as your critical loads -- the essential items that will keep running in the event of a power outage via energy from your batteries. These often include things like your refrigerator, freezer, small heaters, a few lights, medical equipment, and maybe a few outlets to charge devices.

Your solar installer should be able to help you determine what are the absolute necessities, and then design a battery system that is capable of meeting your requirements.

Are solar panel batteries worth it? In terms of providing dependable backup power to keep you and your family safe and comfortable during uncertain times, yes. From a strictly financial standpoint, not necessarily.

Thanks to net metering, most Americans can upload their extra electricity to the utility grid and draw on it for future use for free. However, when the grid goes down, so will their solar system unless there is a battery backup system. With solar batteries, grid-tied system owners can experience a small bit of energy independence without having to sink thousands of dollars into an off-grid storage solution. It's the best of both worlds!

When it comes down to it, the value of solar panel batteries is something that can only be measured on an individual level. You’ll have to determine if a few thousand dollars is worth the peace of mind provided by a reliable backup power source.