Are Solar Panels Worth It in New York? 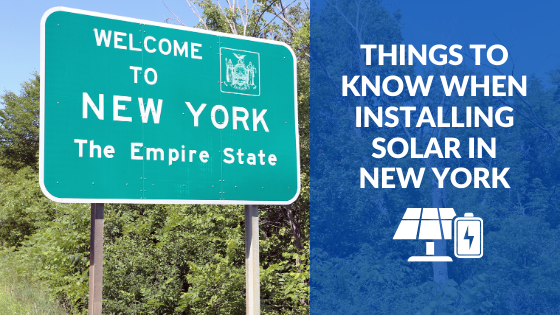 I remember my great grandfather fondly discussing what it was like in 1910 when folks were healthily debating the idea of whether or not airplanes could ever be used as a mode of transportation. Trains were the choice of travel for the sophisticated traveler and the thinking at the time was, even if you could fly multiple people at one time the experience most certainly would be subpar to the posh dining space of a train. Little did they know in 4 short years the first passenger airline service would start transporting passengers between St Petersburg and Tampa, Florida and by the 1950’s roast beef, lobster and prime rib would be served in the sky.

The innovation of solar for a place like New York is discussed by some folks in a similar way as they did about airplane travel with my great grandfather. To take energy from the sun in a place that does not receive a ton of sunlight and turn it into enough electricity to provide sufficient power for a home or business is not practical. 20 years ago that may have been correct, but let’s fast forward in time. Even though NY does not receive as much sunlight as places like Arizona or California, solar in NY does make sense for many businesses and homes, and let me explain why.

Is Installing Solar Panels Worth it In New York?

Does New York get enough sunlight for solar?

The electricity production of solar is obviously influenced by the number of sun hours received in a day. So the question behind the question is, “how many sun hours on an annual average do I need for solar to be worth it”? You will find some recommendations stating you should have at least 4 hours or more of peak sunlight for solar to make sense. However, what this does not tell you is how long it will take for your solar investment to pay for itself. You could have a solar project in upstate NY receive 3.8 daily peak sun hours while another solar project on the Eastern Shore of Maryland receives 4.47 daily peak sun hours and the project in Upstate NY will have a shorter payback.

If electricity production were the only factor in a solar payback it would be much more straightforward. In the right situations, solar in any part of the state of NY does get enough sunlight for it to make sense. With the cost of solar panels decreasing in price, adding a few panels to increase your production is no longer as costly as it once was.

So you may be asking, how could a solar project in upstate NY have a shorter payback than a place that has more sunlight.

The NYSERDA grant that is available for residential and nonresidential projects pays for 12% - 20% of the cost of a solar system.

The NY State Tax Credit is equal to 25% of your solar project with a limit of $5,000. Any credit amount in excess of the tax due can be carried over for up to five years.

Below is an example of a 32-panel solar project (12.8 kW) in central NY. A system of this size would cover an electric bill of roughly $150/month.

Once you understand the financials of a solar payback and the decision has been made to go solar, what comes next?

Items needed for a solar installation in New York

You will need a Building Permit

Before solar can be placed on your property, a building permit will most likely be required. Your solar contractor should be responsible for applying for the permit as well as paying for any cost associated with it.

In addition to the building permit, approval from your local Utility will be needed to connect your solar system to the electrical grid. This is called an Interconnection Agreement (ICA). Most Utilities at the completion of the project will inspect the solar system to make sure it complies with local electrical standards. There is a cost for the ICA just like the permit and your solar contractor should be responsible for applying for the permit and paying for the associated cost.

All the details that go into a solar installation can be overwhelming. The process can feel daunting between the upfront cost, tax benefits and forms, grants, required permits, utility agreements, and the associated paperwork. That is why it’s so important to hire a credible solar installer.

Let me tell you a little about Paradise Energy Solutions. We have made raving fans our number one goal which is evident by our online reviews! We provide a simple process for going solar that removes most of the daunting work off your plate.  After installing hundreds of solar systems in New York, we have successful experience working with many different permitting offices and Utilities throughout the state.

New York is a great place for solar and we would love to help you realize the awesome feeling of never paying your electricity bill again!