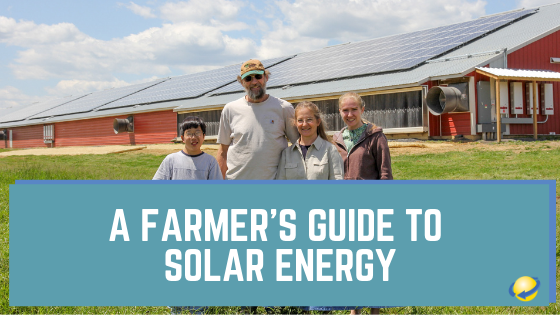 If you own or run a farm, you’re no stranger to the plethora of inevitable expenses it takes to keep things running. And depending on your farm, one of the largest of these expenses can be electricity.

The Parrys, owners of a Delaware poultry farm, decided to do something about their sky-high electricity bill. They took control of their electricity production by installing a solar energy system. And in just the first year alone, they saved $40,000.

The Parrys are part of a larger movement taking hold of the agricultural community over the past two decades. Farmers around the country are taking control of their electricity production and are experiencing first-hand the advantages of solar energy in agriculture.

By installing solar panels on farmland, they’re able to produce their own electricity to power their farm for free.

But how do solar panels affect a farm’s operations, crops, or animals? Are there any short- or long-term implications to installing solar? Do the benefits of solar outweigh the disadvantages?

Whether your farm is part of your family’s legacy, passed down from generation to generation, or you’re looking to sell it when you retire, you need to make the best long-term decision for the fertility of your land and the safety of your animals.

This blog will help you do just that. We’ll take a look at common questions regarding installing a solar system on a farm, such as:

How Much Farmland Will Solar Panels Take Up?

The amount of farmland your solar energy system requires can range from absolutely none to several acres. It all depends on the type and size of the system you install.

There are two main types of solar systems: roof-mounted solar panels and ground-mounted.

Roof-mounted solar panels can be installed on the roof of one of the buildings around your farm, like a poultry house or barn. These tend to be less expensive to install and won’t take any space on your land. However, you will be limited by the size of your roof, and shading from nearby trees could reduce their production. 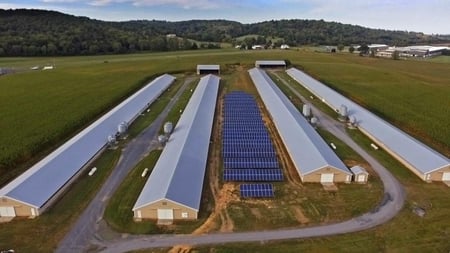 Ground-mounted solar panels will require land, but how much depends on how large of a system you need.

If you’re looking to offset electricity for your farm, you likely won’t need a massive system covering several acres. For example, a solar system that will produce about enough electricity to cover a $1,200 monthly electric bill (100 kW) can take up roughly 8,500 square feet.

Learn more: How large of a solar system will you need?

Will Solar Panels Contaminate My Soil?

Whether you’re a dairy farmer, raise livestock, or grow acres and acres of crops, the success of your farm depends on good soil. Though installing solar may give your farm a financial edge, how will it affect the earth around it? The short answer is it won’t.

Most solar panels, and all the solar panel's Paradise Energy installs, are made from silicon. Silicon is the second-most abundant element in the Earth’s crust and plays a natural role in the growth of plants. It will not harm your land.

What about the metals used in the frames that hold the panels together and the posts that anchor the system to the ground? Made of mostly aluminum, these frames are completely safe. Like silicon, aluminum is a naturally occurring part of the earth’s crust and makes up about 1% of most of the Earth’s soil.

You may know that aluminum can harm crops, but only a small amount of aluminum is released into the soil from the posts of a solar ground mount system, and it has not been shown to have any negative impacts on the earth. Plants don’t absorb aluminum from the ground unless the soil is very acidic. In fact, many farmers are successfully growing crops directly under and around solar arrays.

Can I Farm the Land Once the Panels Are Uninstalled?

Yes, once the solar panels reach the end of their lifespan, you can use that same land for agricultural purposes.

Most quality solar panels are guaranteed for about 25 to 30 years. While they can produce long after their warranties run out, you can expect them to last at least this long. If you decide not to install a new system in that same area, you can uninstall your ground mount. Once the posts and wires are removed, you can begin farming that area again.

Can I Grow Crops Under Solar Panels?

Solar panels on crop farms can be especially beneficial. Depending on the height of the ground mounts you install, a variety of vegetation can still be planted underneath the panels.

As far as crops go, solar panels will not heat up and dry out anything underneath or around the array. In fact, the panels will actually keep things more temperate for those crops by keeping things cooler during the day and warmer at night, which extends growing seasons. Studies have shown that the aggregate temperatures are about the same as they would be in full sunlight, and the growth rate was not affected.

One study took a look at crops grown under bright magenta panels that found 20% of the crops grew better than those grown in full sun! They also required less water and open up options for profitable shade-resistant crops you may not have had the chance to grow.

Another option for vegetation under the panels would be native vegetation and plants that encourage pollination. Not only do these look great, but they provide a habitat for bees and butterflies that will help pollinate your crops.

Are Animals Affected By Solar Panels?

If you raise livestock or poultry, you may be wondering if it’s safe for domesticated animals to go near or under the ground-mounted solar system.

In some cases, this could be a great idea, but it may be best to restrict access in other cases. 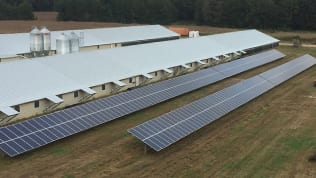 Solar panels don’t pose any immediate outright danger to animals. There is no harmful radiation or chemicals emitted. However, curious animals can chew on wires, exposing them to the threat of electric shock.

Larger animals, such as cattle, could harm the panels by hitting them, and rowdier animals could climb on the panels (we’re looking at you, goats!). While these may not pose huge threats to the animals, sustained heavy impacts on your panels could reduce your panels’ efficiency.

Calmer and smaller animals are popular, such as sheep and poultry, for grazing near the panels. While a ground mount’s average two-foot clearance may not allow enough room for animals underneath the panels, you could raise the system to a four-foot clearance, leaving room for the sheep to graze and maintain the vegetation underneath, meaning no need to mow or use herbicides!

How Much Does It Cost to Install Solar Panels on a Farm?

Solar panels do require an upfront investment. For most farm-sized systems, this can range from about $50,000 to $200,000 after widely-available tax incentives. The price of a solar system will depend on how large of a system you install.

But keep in mind, the larger the system, the more free electricity it produces, and the more you’ll save. Most agricultural solar systems reach their payback in under ten years, leaving the vast majority of the system’s lifespan to produce 100% cost-free electricity.

In most cases, your solar system will start paying for itself the day it’s placed into service, and you’ll get a large portion of your investment back in the first year, thanks to cost-saving government tax incentives.

What Maintenance Do Solar Panels Require?

Chances are, you have a pretty full plate and aren’t looking for more tasks to add to your day. Luckily, solar power requires very little work on your part. 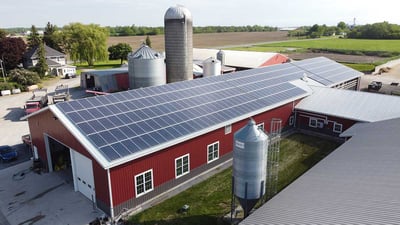 There is no real need for any type of regular maintenance on your part. You can just sit back and enjoy the free electricity they produce. If there are issues with your system, you should contact your installer or a trusted solar panel maintenance company to come out and look at the system.

At Paradise Energy, our Triple Ten Guarantee comes with ten years of system monitoring, a workmanship warranty, and a production warranty, which means if there is a problem with your system, we’ll take care of it.

If you kick up a lot of dust while tending to the fields, and that dust settles on your panels, it may be worthwhile to have them professionally cleaned. However, in most areas of the country, regular rainfall will wash the dust off your panels. It is not recommended to clean your panels, as you can potentially damage them and even void your manufacturer’s warranty.

The same thing goes with snow. While it can have an impact on your solar system’s production, it’s rarely worth clearing it off.

Because of this, removing snow from your solar panels is not recommended. It will likely earn you just a few extra hours of production, which is not worth risking your panels’ warranty or your safety.

Will the Installation Process Slow Down Your Farm?

For farmers, every day is busy. Before you decide to install solar, you’ll want to ensure the installation process won’t interfere with your operations.

The good news is, the installation process is relatively non-invasive, and it can be done just about any time of the year.

Overall, the process could take anywhere from a couple of days to a few weeks, depending on the size of your system. The installation crew will need access to the roof or area your solar panels will be installed, as well as access to your electrical equipment and meters. They should work with you to ensure vehicle traffic and material storage won’t impede your farm’s operations.

As for what time of year is best to install your solar system, that is entirely up to you.

A solar system can be installed any month or season. It all depends on your schedule and your solar installer’s availability. Some farms opt for a spring or summer installation to cash in on the extra hours of sunlight. Some opt for fall and winter installations to apply the tax benefits to that year.

Is Solar Energy Right for Your Farm?

While going solar is a big decision, years of research have shown the only substantial impact of installing solar panels on farms is the cost savings. Through the reduced electricity bill, tax savings, and grants, a solar energy investment can provide long-term savings to a farmer's bottom line.