Rapid Shutdown For Solar Energy: What It Is & Why You Need It 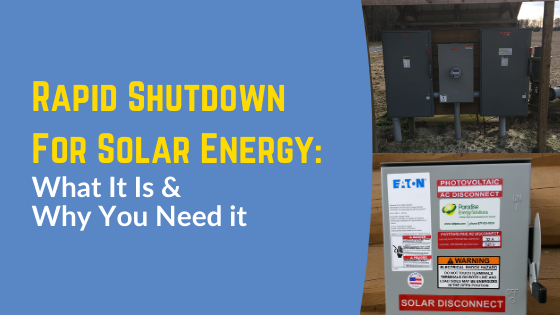 The National Electric Code (NEC) sets the standard for electrical wiring and equipment. Solar energy systems fall under the NEC and there are certain specifications that need to be met in order for your system to pass inspection and get energized.

In this blog, we’ll talk about one of the most prevalent NEC requirements for solar systems: rapid shutdown.

What is Rapid Shutdown for Solar Energy?

Rapid shutdown is a regulation that requires solar energy systems to have what is essentially a solar panel shut-off switch.

First implemented by the National Electrical Code (NEC) in their 2014 guidelines, rapid shutdown requires your solar system to have a fast and easy way to cut off the electricity running through your system as a safety precaution.

Why Is Rapid Shutdown Important?

If the sun is shining and your solar system is in proper working order, there’s live electricity running through it. In most situations, this is entirely safe, as it’s contained in the conduit running from panel to panel to your inverter.

However, in certain emergency situations, those conduits can become damaged, exposing those nearby to the live electricity. This would create a dangerous situation for firefighters and other first responders that may need to access the area surrounding the solar system.

With a rapid shutdown function, first responders can quickly cut off the power in those conduits, giving them safe access to the area around your system.

Rapid shutdown is technically not required everywhere in the United States at this point, though it’s a good idea to install a system with a rapid shutdown disconnect switch.

Rapid shutdown is a requirement of the National Electrical Code, or NEC. Every three years, the NEC releases a set of requirements for safe electrical systems. The NEC is not federally mandated, and each state adopts the code at its own time and discretion. Some states opt for an independent, state-wide electrical code instead.

As of 2021, each state currently enforces the following version of NEC or has their own code. 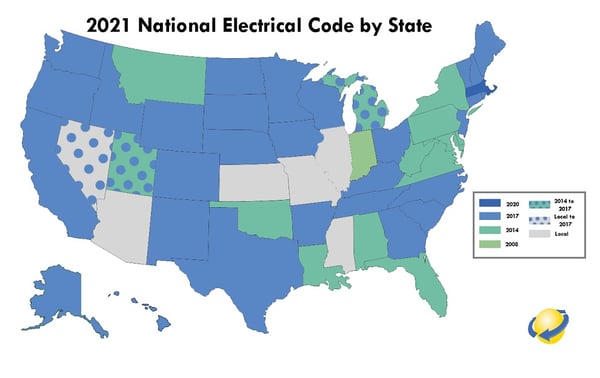 If you live in a state where NEC 2014 or newer is enforced, your solar system will need to follow NEC rapid shutdown requirements to pass the system’s final inspection to have it connected to the utility and powered on.

To comply with NEC, your solar shutdown procedure will need to meet a few specific criteria, which will vary depending on if your solar system is located in a state with NEC 2014 or NEC 2017.

NEC 2014 requires all controlled conductors beyond ten feet of the solar panels to be brought down to 30 volts and 240 volt-amperes within ten seconds of initiating the rapid shutdown switch.

Let’s break this down. Controlled conductors are any conductors that transmit AC or DC power from your solar system, given that they’re beyond ten feet from the solar panels, or solar array. Any conductors within ten feet of the system can maintain power once the switch is initiated.

This will only apply to solar system conductors that are more than five feet in length inside a building, or more than ten feet from a solar energy system.

Additionally, the rapid shutdown initiation device needs to be clearly labeled, as do the other components of the solar system. The device itself can be either a push button or a switch.

If you live in a state that enforces NEC 2017, you’ll have to comply with the expanded requirements regarding rapid shutdown.

NEC 2017 requires any conductors beyond one foot of the solar panels to be de-energized via a rapid shutdown switch. This is a significant reduction to NEC 2014’s ten-foot zone.

And inside of that one-foot boundary, the solar components must be limited to 80 volts within 30 seconds of the initiation of the shutdown device. The most common way to comply with this requirement is to opt for module-level power electronics like optimizers combined with a string inverter, or microinverters.

Does My Old System Need to Comply with New NEC Versions?

If your solar system was installed years ago before NEC 2014 or NEC 2017 was implemented in your area, you won’t have to retroactively install a rapid shutdown switch on your system.

That said, if you plan on expanding your solar system or making other substantial changes that would require another inspection, you may have to bring your system up to the recent NEC regulations, which may include a rapid shutdown switch.

Solar systems aren’t inherently unsafe to first responders. If you have a system that was installed before rapid shutdown was necessary, it likely isn’t exposing you or your building to more risk. That said, it’s certainly a worthwhile requirement that should be followed per local guidelines.

As long as you work with a reputable, experienced solar installer, you’ll have nothing to worry about. They’ll have the experience and expertise to stay on top of changing codes for your state, and they’ll design your system so it complies with all rapid shutdown requirements.