If you’re looking to install solar panels, you may have heard some buzz around the changing National Electric Code and its impacts on PV solar. To keep up with the evolving industry, the National Electrical Code (or NEC) is updated every three years. Despite its name, the NEC is not federal law. It is adopted on state or municipality levels to standardize industry practices and keep people safe.

You may hear NEC 2017 and question why something from a few years ago is just now being instated. Some states take a few years before making the new code effective. As of March 2019, 28 states have at least partially initiated the new code. However, most states in the Mid Atlantic are under the previous code, NEC 2014, but are actively converting to NEC 2017. 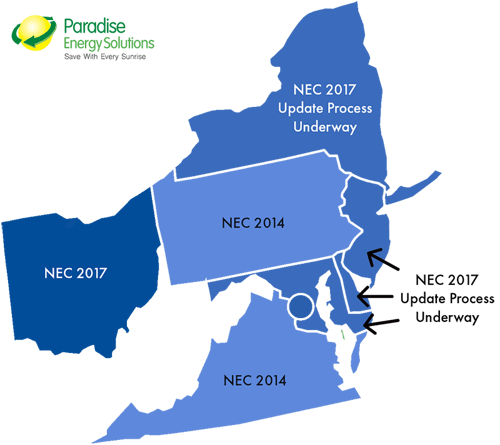 For other states, check out NFPA’s Adoption and Use Map.

If you’re considering going solar, NEC 2017 has either already come to your state, or will within the next few months or years. Though your solar installer should do the heavy lifting, it’s important to understand NEC 2017 solar requirements and what changes this update brings.

How NEC 2017 Requirements Will Impact Your New Solar Installation

The biggest change to the code has to do with more strict rapid shutdown requirements. Read on to learn how these changes will impact your system.

Rapid Shutdown - What Is It and Why Do I Need It? 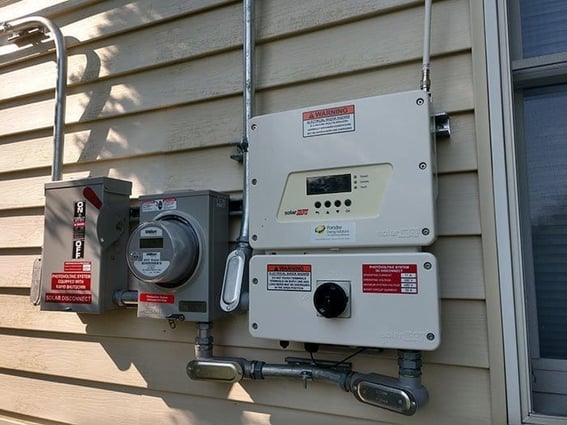 The red switch to the left of the picture is an RSS for a solar system.

A big part of the NEC 2017 update has to do with rapid shutdown. Rapid shutdown is the ability to quickly shut off voltage coming from your solar system. All systems on buildings should include this function, whether your system is on your farm, business, or home. A rapid shutdown switch (also called an initiation device) needs to be installed in an easily accessible location, like next to the utility meter.

Though solar panels are entirely safe to have on your roof or near your building, rapid shutdown was initiated to protect first responders in the event of an emergency, giving them clear and safe access to your roof or the solar array. It ensures no exposed wiring will pose a threat to them while they’re doing the amazing things they do to keep us all safe.

There are a few ways this can be achieved:

Regardless of which type works best for your system, the rapid shutdown device needs to be properly labeled so first responders can quickly find it and shut the system down if necessary.

Section 690 of the NEC, “Solar Photovoltaic (PV) Systems” includes all information regarding solar systems. 690.12 is the part of the NEC that specifies the rapid shutdown requirements. If you live in an area of the country that is under NEC 2014, the code calls for the rapid shutdown switch to reduce the voltage to 30 V within ten seconds of all conductors leaving the ten-foot boundary of the array.

In NEC 2017, the boundary of the array is greatly reduced and calls for panel-level rapid shutdown instead of 2014’s array-level shutdown.

The code breaks voltages down into two distinctions: high voltages (100 V and higher) and low voltages (less than 100 V). By reducing the conductors coming from your system to 80 V and 30 V, they comfortably fit within what’s considered low voltage and should be able to be touched by dry, bare hands with no serious harm.

In order to inform emergency responders that your equipment meets NEC 2017, there are also new signs or labels that need to be included on the system. Your solar contractor should be using labels that can withstand several years of exposure to the sun and elements to ensure no one will be injured while interacting with your system.

At Paradise Energy, our project managers will perform a system walk-through with you once your system is complete. They’ll make sure you know exactly where the rapid shutdown and other switches are located, so you’re always prepared.

It’s important that you work with a solar installer who will design your system in accordance with these protective codes. That’s why Paradise Energy has a team of certified, expert installers that will deliver a safe and high-performing system to save you money!

Interested in a quote or have a question about NEC 2017, rapid shutdown, or something else solar related? Send one of our industry experts a message today!