Enphase IQ8 vs. IQ7: Which Microinverter is best for your solar system? 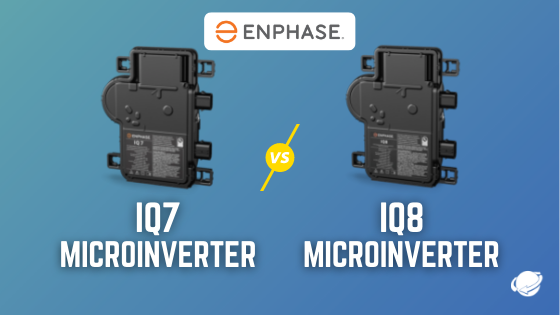 The Enphase IQ8 Microinverter has been in the making for several years and has now been released onto the market; how do you know if it’s the best choice for you?

Solar energy systems use inverters to convert the DC power produced by the solar panels to usable AC power needed in your home or business.

Recently Enphase, a trusted solar company producing microinverters, began offering the IQ8 microinverter. The previous generation, the IQ7 series, is a reliable microinverter that allows solar panels to work independently from one another and effectively catch the most power from each solar panel. Both series are powerful and offer a great way for anyone to go solar; however, the newest generation, the IQ8 series, offers an exciting new feature, sunlight backup.

What is the Enphase IQ7?

The IQ7 is the previous generation of microinverters from Enphase. With the built-in rapid shutdown, this microinverter keeps the solar system completely isolated from the grid during an outage and complies with electrical safety requirements. But this also means you will not be able to use power produced by the solar panels during a utility grid outage.

One helpful feature of the IQ7 is the remote updates, allowing the system to automatically respond to changing grid requirements.

The IQ7 has more than a million hours of testing behind it and a 97% peak efficiency.

The chart below provides the technical specifications for the IQ7 series.

What is the Enphase IQ8?

The IQ8 series of microinverters offer all of the dependable features as the previous IQ7 generation with the newest capability of limited backup power without a battery bank. This exciting new function is called sunlight backup.

In the event of an outage, electrical safety requirements specify that a solar system is completely isolated from the grid. With most inverters, that means without batteries the energy produced by your solar system during the outage is useless.  However, with the new sunlight backup technology, solar owners can now take advantage of the power produced by their panels during an outage, even without batteries.

The IQ8’s sunlight backup offers conditional backup power, without batteries, in the event of a grid outage. The IQ8 immediately flips to the sunlight backup power when an outage is detected, allowing essential electrical loads to continue without pause. It essentially creates its own mini-grid, allowing it to function with or without connection to the utility grid.

For the Sunlight Backup to work, the solar panels will need to have sunlight, meaning this feature will not work at night or in low light. It also will not provide enough power for all electrical loads. A load control device will need to be used to select the critical loads you want to be backed up.

The load control device will push power to the important loads. When power is diminished due to cloud cover or weather, the loads chosen at setup are dropped off as needed.

Solar customers looking for uninterrupted power for important electrical loads will love this new feature, but batteries are still needed for a full backup.

The chart below provides the technical specifications for the IQ8 series.

The Pros and Cons of the Enphase IQ8 Microinverter

The IQ8 is set up to recognize grid events, such as a power outage, and offer backup without a battery. In the case of a power outage, the transfer switch is flipped, relying on sunlight backup only and preventing power from being sent out to the grid. This allows critical loads to seamlessly continue with power from the solar panels while the system is isolated from the utility grid.

This new technology is what sets it apart from the IQ7. This technology allows owners to have some backup power without having to spend large amounts of money on a battery bank.

The sunlight backup feature does have several limitations. Unfortunately, it will not provide enough power to back up all your loads. The amount of backup power available can vary, depending on cloud cover as well as sunlight intensity.

In the case of a cloud covering the solar panels, the system will need to drop off even more loads until the cloud moves. During a power outage at night, the IQ8 is unable to provide any backup.

The exact price you will pay for the IQ8 varies, but it is more expensive than the previous generation of Enphase microinverters. In addition, it requires additional parts and products plus installation. Also, due to current constraints, the availability is somewhat limited.

Which IQ Series Inverter is Best For Your Project?

When choosing the best Enphase microinverter for your system, there are several things to keep in mind.

If a cheaper price is all that matters to you, then the IQ7 is a better choice. On the other hand, the IQ8 might be a superior option over a pricey battery bank if you require some backup power.

A battery bank is better if backup power is required at night and on cloudy days. If you don’t require backup and are fine with occasional outages, going with the IQ7 is most likely your best option. However, if you live in an area with frequent power outages, the Sunlight Backup feature of the IQ8 could be worth the investment for peace of mind.

If you need help deciding which inverter is best for your solar system, reach out to our team of solar experts. You can also check out our various other resources for more information. Start with our in-depth comparison guides: SolarEdge vs. Enphase and Solar Edge vs. SMA.

How Much do Solar Panels Cost in Virginia?

Virginia’s electricity rates are the sixth highest in the nation. That means you could be paying more for electricity than 86% of the

Axitec, Jinko, Panasonic, Peimar, Q Cells, and SunPower create some of the best solar panels on the market today.