Can Solar Panels Cause Fires? 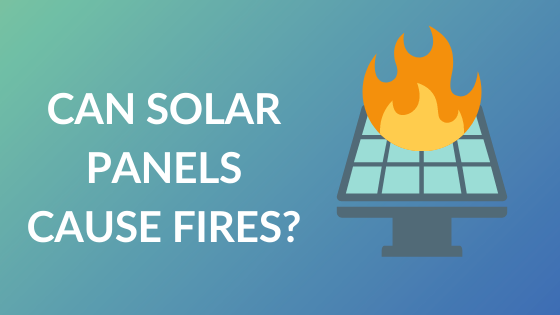 It’s extremely rare for solar panel systems to cause fires. However, before installing solar panels on your property you should fully understand the risks involved, what the leading causes of solar system fires are, what you can do to prevent them, and how to cover your assets.

The risk of solar panels causing a fire is extremely low. While there’s no official, agreed-upon percentage, a study conducted by a German roofing company found there to be just 0.006% chance of a solar system starting a fire. That’s about a 1 in 16,667 chance. For comparison’s sake, you have a better chance of winning an Oscar (1 in 11,500 chance) or being hurt by a toilet (1 in 10,000 chance), according to Forbes.

While there’s no agreed-upon probability for solar panel fires, years of experience and millions of safely installed systems across the world make it easy to say a solar system fire is very rare.

Currently in the US, over 2 million solar systems are safely producing cost- and emission-free electricity. Many of these systems have been in use for several years with no threat of fire or any other safety issues.

When it comes down to it, any electrical system carries the risk of causing a fire, be that a faulty outlet, old wiring, or defective appliances. A solar system is no exception, but the odds are certainly on your side. And by understanding the cause of these fires, you can further reduce the risk.

Improperly designed systems, poorly installed electrical equipment, or faulty products are the main cause of solar energy fires. Any of these issues can cause hot spots which could potentially cause flammable material to catch fire, or they could create arcs between the conductors or to the ground.

Solar systems have live wires with electricity running through them. It’s imperative that these connections are made in the right configurations, and that the wires themselves are properly sized and insulated. If not, just like any other electrical system, electrical faults, like arc faults, short circuits, ground faults, and reverse currents can occur and spark a fire.

While this risk exists with everything from the electricity that runs through your home or business, it isn’t high enough for us to forgo electricity all together. As long as your electrician installs everything to code, you shouldn’t have anything to worry about. The same goes with your solar installer.

How Can I Reduce the Risk of Solar Panel Fires?

If you want to reduce the risk of your solar system catching fire, the best thing you can do is partner with an experienced solar installer with a great reputation for quality work. Your installer should have all the proper licenses required by your state or municipality to ensure they know what they’re doing and that they’re a trusted business. Industry certifications are also an important indicator that their workforce is well-trained and highly educated.

In tandem, you’ll want to be sure your PV system is composed of quality parts from trusted manufactures.

Experienced solar contractors are familiar with the ins and outs of system installations and can avert potential fire-starting issues. They’re familiar with the requirements of the National Electrical Code (NEC), and should have many safe, properly installed systems already under their belt.

While a do-it-yourself solar installation can certainly be a tempting way to cut installation costs, it may significantly increase the risk of solar fires. No matter what that YouTube video or how-to blog says, solar systems are intricate technological systems that create and distribute electricity. Anyone who isn’t a trained electrician or solar installation professional that opts to install their own system is taking on serious risk.

Do You Need Solar Panel Insurance?

In the rare event that your solar system does catch fire, whether it’s the cause or a casualty of a fire caused by other means, you’ll want to be prepared. This includes having the proper insurance coverage to cover any damage.

The type of insurance you’ll need depends on your insurance company and the type of system you install.

Rooftop solar panels are securely attached to your building, meaning they’re a permanent attachment according to many insurance companies. They can be covered under your homeowner's insurance or property insurance in the event of wind, fire, and theft, with no increase to your premiums. However, you may or may not have to increase your coverage limit on your insurance to cover the value the solar system adds to your property.

Solar systems that are not attached to your building, like ground mounts or carports, likely won’t be covered under your current policy. These systems may require an add-on or rider policy.

Because every insurance company and every solar system is unique, it’s best to have a conversation with your insurance agent about your coverage options. Fire or not, it’s always a good idea to have your solar system covered in the event of an accident.

In the event of a fire, there are certain precautions the responding fire department needs to take if there is a solar system onsite. After all, a functioning solar system will have live wires with electricity running through them. Should these be damaged by the flames, they can pose a significant risk to first responders.

It’s a good idea to let your local firehouse know that your building or property has a solar system installed. You can do this by simply calling to let them know, or clearly labeling it on your building. Not all solar installations will be immediately visible, depending on where they’re installed, and they could be easy to miss in an emergency situation.

Tipping them off will also help your fire department prepare for fighting fires on properties with solar installed if they need to do so. While solar energy is fairly common in most areas of the country by now, it’s better to play it safe instead of assuming they’ve had the reason to prepare.

There are a few specific things they need to be aware of to stay safe in the event of a fire, whether it’s a fire caused by the solar system itself or just a fire on a building with solar installed. One of the first things your firefighters need to do is turn off your solar system with the rapid shutdown switch. The rapid shutdown switch is most often the same as the disconnect for the PV system (required for all systems).

The rapid shutdown switch will immediately stop all the voltage coming from your system. Think of it as that big, red (most of the time) off switch. It should be located somewhere easily accessible and visible, so firefighters can quickly pull the switch, cutting off the power from your system. This will then give them clear and safe access to the roof so they can fight the fire without having to worry about the risk of electrocution.

Is it Safe to Install Solar Panels?

Over the past decades, solar energy has proven itself to be a safe, reliable way to reduce your electricity bill and your carbon footprint. That said, it’s important to be aware of solar panels and fire risks.

Overall, the small risk of your solar system causing a fire is, for most people, not enough to turn them off to installing solar altogether. It’s no riskier than any other electrical system within your building. As long as you partner with a trusted, licensed solar professional, you shouldn’t have anything to worry about.