Payback and ROI of Solar Energy for Homeowners in 2021 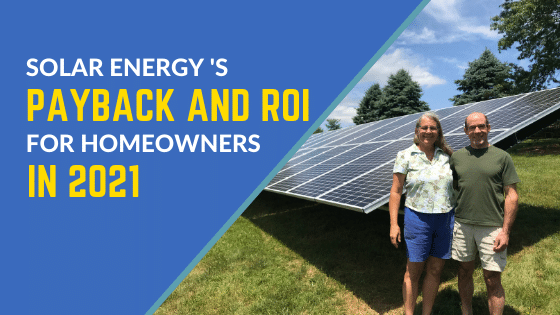 Investing in a solar energy system can have powerful financial benefits for your home, allowing you to all but eliminate your monthly electric bill.

But with cost-saving incentives and policies varying from state to state, along with electricity prices and installation costs, it can be hard to quantify the specifics of this investment without reaching out to a solar installer for a quote. That's where this blog can help.

In this blog, we'll give you an idea of what you can expect for a solar investment in your state. We share information on the average solar investment for six states on and near the East Coast, giving you insight into the average system size, return on investment (ROI), payback period, price per watt, and environmental impact.

How We Made our Calculations

The statistics shared in this blog are based on the average of all residential solar systems we installed in a particular state in 2020. They’re real numbers from real people just like you who already installed solar and are enjoying the cost- and emissions-free electricity their systems generate.

It’s important to note that people’s incentives for going solar vary greatly, as do the ROIs, payback periods, system size, and more. These numbers are just averages and are meant to give you a broad idea of what you can expect. However, the breakdown of your investment could look very different from the average for your state.

Solar Investments for the Following States:

2021 Solar Payback and ROI for Homeowners in the mid-Atlantic

Many homeowners in Delaware are choosing to offset their electricity bills by installing solar energy systems. With the grants offered through Delmarva Power, Delaware Electric Cooperative, and Delaware Municipal Electrical Corporation (DEMEC), you can further reduce installation costs on top of the 26% federal solar tax credit.

What’s the Average ROI of Solar for Delaware Homeowners? The average ROI for a solar system installed on a home in The First State is 6.05%.

What is the Average Payback of Solar for Delaware Homeowners? Delaware homeowners, on average, will pay for their solar system in 19.25 years, leaving plenty of time left in the solar system’s 30+ year lifespan to produce free electricity.

What’s the Environmental Impact? Each year, the average system will offset 7.68 tons of CO2 or 16.2 barrels of oil. Solar panels allow your home to make a real, measurable impact on the environment.

Net metering, SRECs, sales and property tax exemptions, and the Clean Energy Grant all make going solar in Maryland a great option for homeowners. If you’re considering offsetting your electricity bill with solar energy, here’s what the average investment looks like.

What’s the Average ROI of Solar for Maryland Homeowners? The average solar ROI for homes in Maryland is 7.65%—one of the highest on our list.

What is the Average Payback of Solar for Maryland Homeowners? The average payback period for residential solar systems in Maryland is just 13 years. That leaves over half of your solar system’s life to produce 100% free electricity, as most solar panels are guaranteed for 25 years to 30 years. However, they can go on producing electricity even longer than that.

What’s the Environmental Impact?  The average residential solar system in Maryland will offset 12.89 tons of CO2, or 27.19 barrels of oil each year. Over its lifespan, that quickly adds up to a significant reduction in greenhouse gas emissions!

New York may not be known as the sunniest state in America, but it is still a great state for solar energy. High electricity rates combined with powerful state and local incentives make solar electricity a great investment for many New York residences. The state also waives sales and property taxes for solar owners.

Unlike other states on this list, New York does not offer net metering, though they still compensate solar owners for the excess electricity they upload to the grid. They do so with the VDER Value Stack.

What’s the Average ROI of Solar for New York Homeowners? New York homes receive, on average, a 6.87% ROI on their solar energy investments.

What is the Average Payback of Solar for New York Homeowners? The average solar power payback period is 15.6 years. When compared to solar panels’ guaranteed life of 25 to 30 years, that leaves nearly half of the system’s lifespan left after it’s paid for itself. And just because the guarantee on your panels expires, that doesn’t mean your system won’t continue to work for years to come.

What’s the Environmental Impact? Your solar system can save 7.3 tons of CO2, or 15.41 barrels of oil each year, based on the average New York home.

Net metering, a healthy SREC market, tax exemptions, and a low-interest loan program all sweeten the deal for Ohio homeowners investing in solar. Here’s a look at what solar energy can do for your home’s finances and the planet.

What’s the Average ROI of Solar for Ohio Homeowners? The ROI for solar panels for a home in Ohio is 5.95%, on average. Not only will you be helping the environment, gaining energy independence, but you’ll also be investing your money in a tangible asset that brings value to your property.

What is the Average Payback of Solar for Ohio Homeowners? The payback period for solar panels for the average home in Ohio is 17.26 years. Most solar panels are guaranteed by their manufacturer for 25 or 30 years, meaning you’ll have plenty of years left to enjoy free electricity. And it’s quite possible that your solar system will go on producing electricity for years after the warranties expire.

What’s the Environmental Impact? If you install a solar system for your home, it can keep an average of 10.65 tons of CO2 or 22.55 barrels of oil out of the atmosphere. 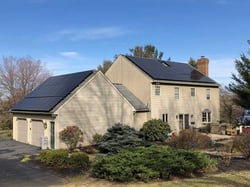 What’s the Average ROI of Solar for Pennsylvania Homeowners? The average solar system for a home in Pennsylvania has a 7.42% ROI.

What is the Average Payback of Solar for Pennsylvania Homeowners? The average payback period for solar panels installed on PA homes is 14.89 years. Depending on the brand of solar panels you install, they can be guaranteed for 25 to 30 years. That means you’ll have at least ten to 15 years of free electricity once your system reaches payback. And it’s certainly possible for your solar system to go on producing free electricity once the warranty expires!

What’s the Environmental Impact? Each year, the average residential Pennsylvania solar system saves 12.52 tons of CO2 or 26.41 barrels of oil.

With net metering, property and sales tax exemptions, and an SREC market, a solar system can be a great investment for Virginian homes. On top of that, Virginia has the lowest solar cost per watt on our list.

What’s the Average ROI of Solar for Virginia Homeowners? The average ROI for a residential solar system in Virginia is 6.22%.

What is the Average Payback of Solar for Virginia Homeowners? The solar panel payback for Virginia homeowners is 15.18 years on average. Compare that to solar panel warranties lasting 25 to 30 years, and your system could last nearly twice as long as the payback period.

What’s the Environmental Impact? Each year, the average residential solar system in Virginia will offset 10.48 tons of CO2 or 22.10 barrels of oil.

Was your state not included, or are you wondering how your state stacks up against the others? Here’s a look at the overall averages for all six states: Delaware, Maryland, New York, Ohio, and Pennsylvania.

Is Solar a Good Investment for Homeowners?

While trends can be seen from state to state, the value behind each solar system is highly specific to each home. The more electricity your home uses, the higher your cost of electricity, and the more cost-saving incentives available to you, the better your investment will be.

That said, solar offers significant benefits that go beyond saving you money each month. Every solar system can have a positive impact on the environment. It will also provide a level of energy independence from the utility companies, and with batteries to store energy, solar can even be a dependable backup power solution for emergencies.

Find Out the ROI and Payback for Your Solar System

If you’re interested in solar energy, take the first step today and request your free, no-obligation quote. The request takes less than a minute, and you’ll be on your way to saving on energy for 30+ years.

If you're not ready for a quote, download our Solar Buying Guide. This guide answers many of the common questions our customer's ask before investing in solar.