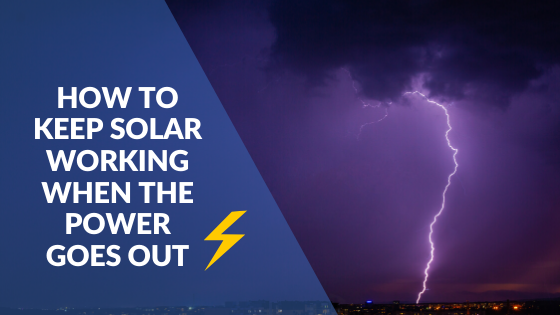 All it takes to generate electricity is a properly functioning solar system and some sunshine - so many would think that they would still have electricity even when the power goes out and the grid goes down. Unfortunately, this isn’t true for the vast majority of solar systems, at least not without some extra equipment.

It is possible to keep your home, business, or farm humming should the grid go down, but only if you choose to install an energy storage system, or batteries, that will store the energy previously generated by your solar system.

Most solar systems installed in America today are grid-tied systems, meaning the buildings they power are connected to the electric grid. There are many benefits that come with grid-tied solar systems, which have contributed to their popularity over the years. One of these benefits, which is available to solar system owners in most states, is essentially the free storage of your excess electricity on the power grid.

In many states, this policy is known as net metering. Net metering makes it mandatory for utilities to offer you “free storage” of your solar energy by allowing you to “upload” excess electricity generated by your system to the electric grid. In return, you’ll receive a kilowatt-hour-for-kilowatt-hour credit.

In some states, net metering isn’t mandated, but another form of compensation for adding solar-generated electricity to the grid may be, and it may be even more beneficial. In New York’s case, this is part of the VDER Value Stack. Check out the map below to see which states mandate net metering or other compensation methods. 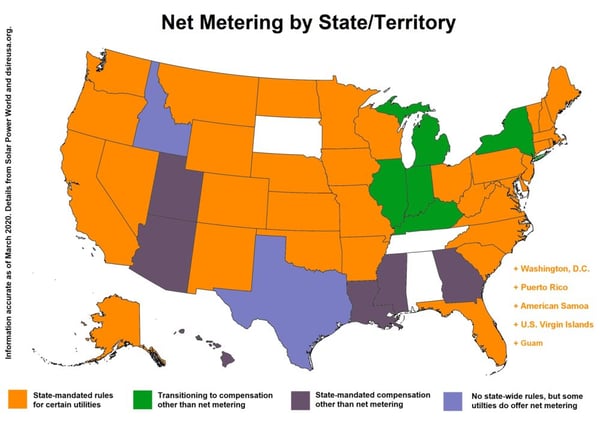 This is pretty beneficial to solar owners. It means that the excess energy a solar system generates during the day can be pulled back off the grid to use when the system isn’t producing electricity, like at night or during rainy weather, for free. Without this policy, you’d either be losing out on electricity generated by your solar system, or you’d have to invest in a large, and potentially expensive, energy storage system.

However, there is a downside to grid-tied systems. Because they are connected to the electric grid, they’re required to shut off when the grid goes down - even though they can still, technically, produce electricity. While this may be frustrating, it’s for a good reason. If your solar system is pushing electricity onto the grid, it could be very dangerous to utility workers who are working to fix the issue.

Off-grid systems, on the other hand, can safely keep churning out electricity and supplying power to their buildings. But in order to provide a dependable amount of power, they need large energy storage systems, or batteries, which can get quite pricey.

But if maintaining power while the grid is down is important to you, it is possible with a grid-tied system.

The same batteries that owners of off-grid systems depend on to provide them with power while the sun isn’t shining can keep buildings with grid-tied systems running when the power goes out. And the good news is the grid typically only stays down for a few hours at the most, meaning you likely won’t need as many batteries to back up your grid-tied system as an off-grid system, saving you a fair bit of money.

How does battery backup work with a grid-tied solar system? When your solar system produces more energy than you are currently using (say, at 12 pm on a sunny summer day), your excess electricity will go one of two places: the electric grid, or your batteries (if you have one). Once your batteries are fully charged, excess power will be diverted to the grid so you can take advantage of net metering, as long as it’s available in your area.

There are two main ways a battery or batteries can be connected to your solar system: AC coupling and DC coupling. While AC coupling is less efficient, it may be less expensive if your solar system was installed recently and you’re looking to add a storage solution. DC coupling may be a better option if you are just installing your solar system, or if your inverter is at the end of its expected lifespan (which, for the typical string inverter, is around 15 years).

AC coupling allows you to integrate a battery into your solar system while keeping the inverter you have. This method takes the DC power that’s generated by your solar system, feeds it through your original inverter as it always has, thus turning it into AC power. From there, the power will either go to your building to run your appliances, equipment, or lighting, or it will go to a second inverter, the storage inverter. Because batteries store energy as DC power, the storage inverter will convert the AC power back to DC power. When it is needed, it is fed back to the original inverter to be converted to AC power. However, this back and forth between DC to AC to DC to AC power means there will be a loss of energy compared to the other option, DC coupling. 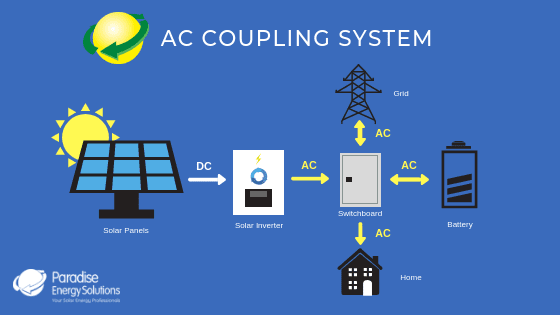 Despite being less efficient, AC coupling has its benefits. This method is typically easier to install, which means it costs less money. It also offers more flexibility as to its location.

In short, if you have a perfectly functioning, standard inverter that’s relatively new, AC coupling is probably going to be your best bet, despite the loss of efficiency.

Here’s how it works. DC electricity generated by your solar panel first passes through a battery, which stores a portion of this DC electricity. From there, energy flows through the hybrid inverter and is converted to AC energy, which then can be used in your home or uploaded to the grid.

If you need to draw on energy from your battery, the stored DC energy is then passed through your hybrid inverters to get converted to AC power. Then, that energy can be used to lower your loads when the power goes out. 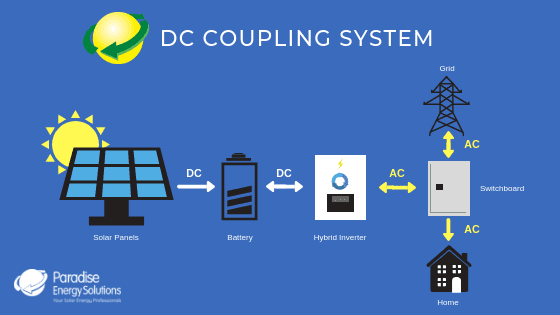 Because the solar-generated electricity is only going from DC to AC, as opposed to DC to AC to DC to AC, it’s more efficient than AC coupling. That said, buying this new inverter can be expensive, and installing it can require a bit more labor. But if you need to replace your inverter anyway, or you are installing a brand new system, this could be the better option.

Are Batteries Worth it for Grid-Tied Systems?

A major difference between off-grid and grid-tied solar is that storage solutions are optional for grid-tied systems. Because grid-tied systems can store excess energy on the grid for free, they can still use solar energy to fulfill 100% of a building’s energy needs with around-the-clock access to power (except when the grid goes down).

Off-grid systems, however, are reliant on their large battery systems to supply on-demand power. That’s because solar panels, no matter where they’re located or how efficient they are, can’t produce electricity if it’s raining heavily or during nighttime. They need batteries to store enough energy to use until the sun returns.

So while battery storage isn’t necessary for grid-tied systems, it does allow owners to have access to power when the grid goes down. This can be extremely valuable. The promise of reliable access to electricity, regardless of downed power lines or severe weather, can provide power to essential medical devices, keep the lights on, keep your food cold, or keep your building warm.

That said, solar batteries come at a cost. At around $15,000+ for one battery, you’ll want to evaluate exactly what is worth backing up in a situation where the grid is down and what you can live without. There are, however, incentives that may be available to you, such as a 26% federal tax credit and even some incentives on a state level. Maryland, for example, offers a 30% tax credit for solar battery installations up to $5,000 for homes and $75,000 for commercial properties. Get more information on how much a home battery backup system for solar would cost you.

If backup power is essential to you, but you don’t want to spend the money on a large battery system, you may want to take a look at an electric generator. Running on gasoline, these generators may come at a much lower price than solar batteries. Starting at just a few hundred dollars for a small one.

However, their downside is that they don’t run on a free or environmentally-friendly fuel source as solar batteries do - they run on gasoline, which can get expensive and difficult to find in wide-spread emergency situations like natural disasters. Learn more about combining solar batteries and generators.

Solar batteries can be a very valuable addition to your grid-tied solar system, giving you reliable access to free electricity when the power goes out. With advances in technology making battery prices lower and attractive incentives for homeowners and businesses, now may be the right time to install a battery backup.