How Safe Are Your Solar Panels in Severe Weather? 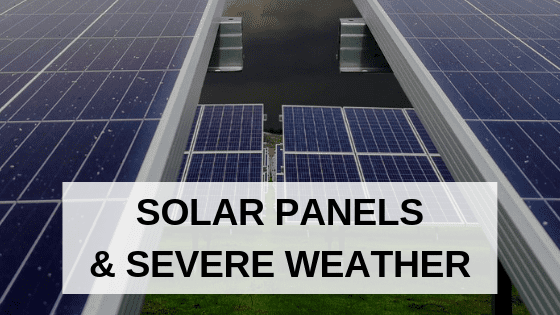 On September 11, 2018, a hurricane with 1-minute-long gusts of wind at speeds of 150 mph raged off the coast of North Carolina. As the storm drew closer to the shore, it became increasingly apparent that it would make landfall. There was no time left to spend hoping the storm would travel back out to sea.

Residents and businesses up and down the southeast coast prepared for hurricane-force winds, severe flooding, and days without electricity.

On September 14th, Hurricane Florence made landfall. It moved at a maddeningly slow pace - just 2-3 mph - drudging along as it uprooted trees, wreaked havoc on electrical infrastructure, and caused historic flooding.

But Florence did finally pass. When the clouds cleared and the sun came out, thousands were left in the dark as coal-powered utilities remained crippled. However, a vast majority of North Carolina's solar energy systems were left unscathed, and where the grid infrastructure allowed, customers of solar energy had power just a day after the storm.

Hurricane Florence, and countless storms before and since, proved solar power can survive some of the most severe weather thrown our way - and they can do it better than traditional electricity sources. But solar systems are not invincible. Severe weather can inflict damage, causing your system to stop performing or perform sub optimally.

Solar system components are tested in all different weather conditions to ensure they’re durable enough to withstand a reasonable level of severe weather. From high winds to hail and all the other issues that come with extreme weather events, we’ll share just how much your solar panels can withstand, whether you’re located in hurricane country, tornado alley, or threatened by severe thunderstorms and winds. 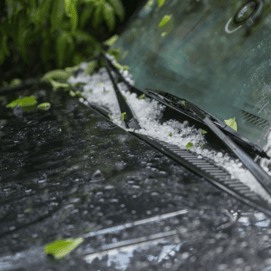 In 2017, a severe hail storm passed through Colorado, dumping hail up to 3 inches in diameter and leaving significant damage to vehicles and homes. Standing in the storm’s wake was the National Renewable Energy Lab (NREL) in Colorado, which has over 3,000 panels on their roof. Of these 3,000 panels, only one solar panel was damaged during the storm.

Tests revealed the cause of the cracking of the panel’s glass module cover. A number of hailstones hit the panel simultaneously in almost the exact same place, causing a series of tiny cracks in the glass cover. It was certainly unlucky, but as shown by the thousands of other panels that remained intact, pretty rare.

The durable glass cover that protects the inner workings of the solar panel is designed to take a significant hit from hail.

Backed by manufacturer testing, many solar panels are rated to withstand hail of up to an inch in diameter falling at about 50 miles per hour.

For comparison’s sake, the average hailstorm drops hail from ¼- to ½-inch in diameter at around 20 mph.

While hail damage to solar panels can certainly occur, it does not happen frequently. 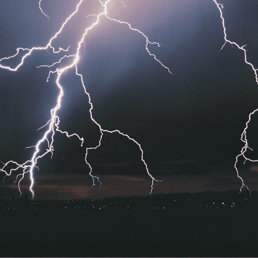 From distant thunder that scares your dog, to a serious weather event that can knock out the electricity grid, thunderstorms come on quick, and they are unpredictable.

Thunder is caused by lightning, meaning all thunderstorms have lightning. And lightning can inflict serious damage to your solar panels. If your system is not properly protected, a lightning strike can result in lost production and require repairs and replacements. The severity of the damage to your solar system will vary with how direct the strike is.

If the lightning bolt strikes your system directly, it can melt the panels or inverter. Thankfully, direct strikes are rare.

Indirect strikes, however, are more common. If lightning strikes close to the solar system, a branch current from the bolt can flow over the solar panels, resulting in high-voltage surges which can damage various system components.

Is there cause for concern? While solar systems are made up of conductive parts, your solar installer needs to follow requirements (NFPA780) to ensure your safety and your building’s safety. They should also be using high-quality inverters that come factory equipped with surge suppression circuits. However, these circuits can degrade over time. If your system has been in service for more than five years and you live in an area that sees lightning, you should have your solar installer exchange the surge components in your inverter with new components from the factory.

If your system has suffered surge damage, your installer should be prepared to provide the cost to obtain and install extra surge protection equipment to protect your solar investment. 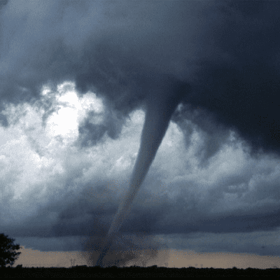 Solar panels’ resistance to wind is dependent on a variety of factors relating to how and where they’re installed. Wind travels between the bottom of solar panels and the roof (on roof-mounted systems) or between the panels and the ground (on ground-mounted systems). This creates an uplifting force, and if not installed properly, your panels could blow off their racking.

But how likely is this, even in extreme winds? As it turns out, not very. If this does happen, it’s most often because of a failure in the system’s racking or the roof that the system is attached to, not the panels themselves.

76% of tornados have wind speeds ranging between 40-112 mph, and most solar panels are certified to withstand winds of about 140 mph.

But this varies based on your location. Local building codes, which are based on the area’s weather, dictate the wind speeds that solar systems need to withstand. For example, in Florida, where strong, hurricane-force winds are common, solar panels must be installed to withstand winds of up to 185 mph. 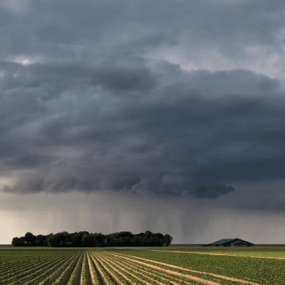 An often-overlooked element of severe weather is precipitation. But your solar panels should fair well, even in the heaviest of rains and snows.

Solar panels are completely waterproof and are built to last for decades outside and through countless showers and storms.

The glass sheet in the front and a durable back sheet protect the solar cells and electrical components inside. In the rare event that water does get in, it will likely be covered under the manufacturer’s warranty.

If severe weather brings snow or ice that accumulates on your panels, they will likely be fine. Panels are constructed to withstand a significant amount of weight from snow piling on top. In most areas of the country, the snow will melt off your panels much quicker than the ground and other surfaces, leaving them exposed and ready to generate plenty of free, clean energy.

What If Your Solar Panels are Damaged?

In the event that your system is damaged by severe weather, most homeowner’s insurance covers rooftop solar systems, and no separate policy is needed. However, it’s a good idea to make sure your policy reflects your home’s value with the solar system since solar does increase the value of your home.

If you install a ground mount system or a carport, an additional policy might be necessary, because your insurance company may not consider the system a permanent attachment to your property.

Once you made the decision to purchase a solar system, contact your insurance agent and make sure you have adequate coverage for the full replacement cost of your solar system.

If you use a PPA or lease your system, it’s most likely covered under the system owner’s policy. However, you should examine the contract to make sure adequate coverage is provided, and be sure to let your insurance agent know about it.

While solar panels are not invincible, they have proven their sturdiness storm after storm, from hurricanes in the southeast to Rocky Mountain hailstorms. To make sure your solar investment lasts for decades, partner with an experienced and reputable contractor that uses quality parts.