How Green is Solar Energy? 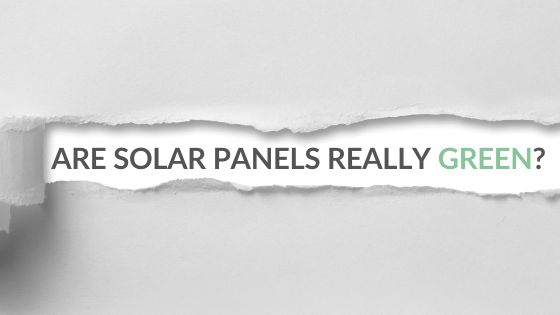 A healthy bit of skepticism is important these days. From outrageous news stories with sketchy origins to grandiose claims made by advertisers, we all need to stay at the top of our game to ensure the information we’re taking in and sharing is accurate.

One topic where this applies is sustainability. Going green can go a long way when it comes to motivating customers and creating good PR for businesses. While communicating green practices is essential and important, not everyone represents this information accurately.

That’s why we want to take a critical look at something that’s near and dear to us - solar energy. How environmentally friendly is solar as a source of electricity?

It’s worth pointing out here that we are a solar panel installer. However, our goal is to be as open and transparent as possible about the products and services we offer. At the end of the day, if we didn’t think solar energy had a positive impact on our environment, we wouldn’t be in the game.

That said, here’s a deep and honest look into how green solar energy really is. We’ll look at the entire cycle of solar energy: the actual energy the panels generate, the manufacturing process, and disposal/recycling methods once the panels have reached the end of their life.

Note: This blog is addressing Crystalline Silicon PV Solar Panels, which is the most common type of solar panel used. These panels are different from Thin Film Solar Cells.

How Clean is Solar-Generated Electricity?

To us, this is one area where solar-generated electricity undoubtedly gets an A+.

To understand why, we need to quickly explain how solar panels generate electricity.

As the sun shines down and reaches your solar panels, photons from the sunlight are absorbed by the panels’ semiconducting silicon material. This causes the electrons to separate from the atoms and move about. It’s that movement of electrons that generates direct current electricity (DC). The DC electricity is sent to the system’s inverter which converts the energy into AC electricity - the type of energy that your home, farm, or business uses.

While that is a very high-level explanation of solar energy, that’s about all it takes to run your screens, appliances, and even cars.

Solar-generated electricity doesn’t require the use of limited resources like fossil fuels, and it doesn’t generate emissions that can be harmful to the environment like some renewable resources, like burning wood, does. It merely uses energy from the sun, which is the most abundant source of energy on the planet.

Here’s where it gets a little bit trickier. 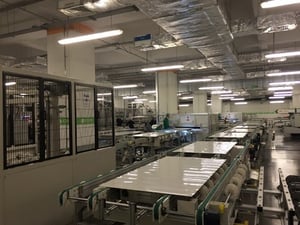 In order to make the silicon wafers that convert the sun’s photons to electricity, manufacturers process quartz at high temperatures. This releases sulfur dioxide and carbon dioxide into the atmosphere. But how much of these greenhouse gasses does solar release, compared to other sources of energy?

The World Nuclear Association released a study in 2011 comparing the amount of carbon dioxide equivalent (CO2e) per gigawatt-hour (GWh) for various sources of energy. The results show that although solar photovoltaic (PV) energy does create some greenhouse emissions, they pale in comparison to traditional energy sources.

While nuclear energy generates less CO2, it certainly isn’t emission-free. And the materials it does emit are much more harmful than CO2.

It’s also important to note that the data collected for this report date back to the first decade of the 2000s. Over the past ten to twenty years, the solar industry has made significant improvements in the sustainability of their manufacturing process, and they continue to do so. For the past 40 years, each time the installation capacity of solar energy doubled, overall emissions from solar energy have decreased 17 - 24%, according to a 2016 study.

If not properly disposed of, this substance can irritate the skin and can pollute the air. However, most solar panel manufacturers recycle this substance and can reuse it to make additional panels, which not only decreases the costs of solar panels but also helps keep the substance out of the environment.

Of the four brands of solar panels Paradise Energy currently offers customers, we’re happy to share that the Hanwah Q Cells and LG are both ranked as 2018-2019 leaders on the solar scorecard. These two manufacturers come in at #5 and #7 respectively.

It’s essential to note that these chemicals pose no risk to farms, businesses, and homes with solar panels. Solar panels are extremely safe, whether they’re mounted to your roof or installed as a ground mount right next to your crops.

Can You Safely Dispose of Old or Damaged Solar Panels?

Solar panels can last for decades. While most manufacturers guarantee their panels for 20 to 30 years, that doesn’t mean they’ll definitely stop working after that period. But just like anything else, they can’t last forever.

Solar panels, while an entirely safe way to generate emissions-free electricity, do have potentially harmful components. While your building and property won’t be exposed to these components while your system is up and running, they could pose potential dangers if left to sit and decompose in landfills. So what do you do with your panels when they do come to the end of their lifespan? You recycle them.

Solar panels are made up of glass, silicon, and metal. These three materials are recyclable, but they first need to be disassembled. In the process developed by the European association PV Cycle, 95% of the glass and 100% of the metal are reused in new solar panels.

As for the silicon wafers, a slightly more involved process is required. First, the wafers undergo thermal processing to separate the silicon from its plastic covering. The plastic is then reused as a heat source for this exact process, keeping potentially dangerous emissions from the air.

Then, the remaining silicon is physically separated, and 80% of it is reused. The remaining 20% is then etched away and broken pieces are melted together. Of that remaining 20%, 85% can be reused.

While this process has been tried and tested, the need for large-scale recycling has not yet been necessary due to the long lifespans of solar panels. There just simply were not enough solar panels installed 20 to 30 years ago to create a big demand for recycling today.

However, come the end of the 2020s, this will likely start changing as the oldest systems begin to phase out. Up until then, we’ll surely see even more efficient methods of solar panel disposals. But the current method is still more than efficient enough to allow solar panels to have an enormously positive impact on the environment.

Thanks to constantly improving manufacturing and recycling methods, solar holds strong as a safe, affordable, and dependable option to both reduce your environmental impact and save you money.

If you’d like to know just how much of an environmental impact a solar energy system could have, we can tell you!

With solar energy, you can make a measurable, positive difference for our world. And saving some money in the meantime can’t hurt either!