Solar panels take energy from the sun and turn it into electricity. But how can something so small and regular-looking turn something as simple as sunshine into energy that can power your TV and appliances?

What are Solar Panels Made of?

Solar panels are a little like sandwiches. Several layers of different materials are layered together to create something much better than the sum of its parts. And when you expose them to some energy (a toaster oven or the sun), magic happens. 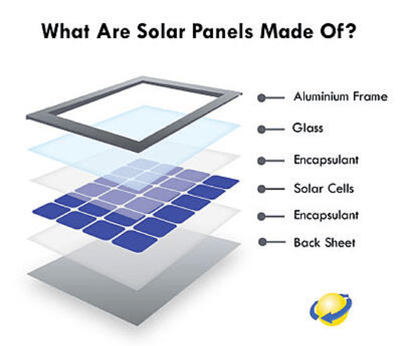 However, instead of bread, meat, and vegetables, solar panels are more or less made up of the following six layers:

Glass
The top layer of glass acts as a protectant for the panel’s more delicate layers below. While a glass barrier may sound ridiculous, it’s the perfect material to act as a shield.

The glass used on solar panels is extremely durable and is built to withstand significant impacts. In fact, many solar panels are rated to withstand 1-inch hailstones falling at 50 miles per hour. So while this glass isn’t invincible, it can certainly take a punch.

Encapsulant
Below the glass lies a layer of encapsulant, which binds the glass to the layer of solar cells below. This encapsulant is specially formulated to withstand high temperatures and UV exposure. It also needs to remain perfectly clear in order to allow sunlight to pass on to the layers below. The most popular type of encapsulant in solar panel manufacturing is EVA (ethyl vinyl acetate).

Solar Cells
Next comes the star of the show and the “meat” of the solar sandwich—the solar cells. These are what you see when you look at the front face of a solar panel. They’re typically blue or black, and either look like several small octagonal squares (monocrystalline panels) or several small rectangles (polycrystalline panels). Each solar panel is made up of several of these cells.

These solar cells are made up of semiconductor silicon crystals. To continue with our “cheesy” sandwich comparison. Monocrystalline cells would be like fresh-roasted turkey breast, and polycrystalline would be similar to bologna.

However, a solar sandwich has “double meat.” The silicon cells are typically stacked one on top of another.

Backsheet
Below another layer of encapsulant lies a backsheet. This is what makes the white or black lines in a solar panel. Each solar cell is spaced apart, showing the backsheet below.

Just like a good piece of bread on a sandwich, the backsheet helps to keep everything together and protected. Backsheets are made of a polymer or a combination of different polymers and keep out moisture and other unwanted materials.

Aluminum Frame
The entire solar panel is then wrapped in an aluminum frame around the edges. This keeps all the layers secure and protected.

How Does a Solar Panel Generate Power?

Now that we’ve gone over each layer of a solar panel, we’ll take a look at how these layers can turn sunlight into electricity.

As we hinted at above, most of the heavy lifting is done by the silicon solar cells.

You’ll recall that there are two layers of these silicon cells. Phosphorus is added to the top layer, giving it a negative charge (which means more electrons). Boron is added to the bottom layer, which decreases the number of electrons and results in a positive charge.

Here’s where the solar magic happens.

The positively and negatively charged solar cells create an electric field. When a photon (a particle of sunlight) hits the panel, electrons are knocked free. They then find themselves attracted to metal conductive plates on the sides of the cells. These electrons are then pushed into connecting wires and lo and behold, emissions-free electricity!

DC electricity is transported to the inverter through secure wires. From there, the inverter converts it into AC power. From there, it’s sent to your distribution panel to be used in your business, home, or farm.

For grid-tied systems, any electricity not immediately used will be transferred to the electrical grid. If you live in a state with net metering, you’ll get a kWh-for-kWh credit from your utility company, meaning you can draw that much power from the grid anytime you need it at no cost.

Solar Panels Have a Simple Design, But Big Job

Compared to most other forms of electricity generation, solar power is remarkably simple and safe. Solar panels generate renewable energy with no emissions and with nearly no impact on the environment. These six main layers of materials are combined in such a way that clean electricity can be produced nearly anywhere that the sun shines.

As solar technologies improve, equipment is becoming more efficient while the cost of panels continues to come down.

While there are other options of renewable, alternative energy out there, solar’s simplicity makes it one of the best. At least in our book!

On June 5, 2022, President Biden announced a 24-month tariff exemption for solar panels produced in Southeast Asia. This calmed the growing