Can Solar Panels be Recycled? 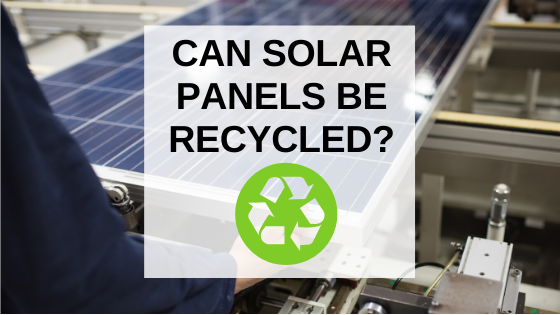 Solar ownership is a long-term investment. Many manufacturers guarantee their solar panels up to 25 or even 30 years. And it’s very likely your solar system will go on producing for years after that.

Long story short, you can expect it to produce free electricity for decades.

But like everything else, your solar panels won’t last forever. Whether you’re looking into solar for the first time or you have had solar for years, you’re probably curious about what happens to solar panels after they’re done producing electricity.

We’re here to answer that, and the following:

How Are Solar Panels Recycled?

Yes, solar panels can be recycled. How do we know? Because there are companies already recycling solar panels.

Solar panels are primarily composed of three materials: glass, silicon, and metal. All three of these components are recyclable. However, unlike a glass bottle or a piece of scrap metal, solar panels need to be disassembled first.

PV Cycle, a European-based solar recycling association, has come up with a process to take care of this. After the components are disassembled, 95% of the glass and 100% of the metal can be reused in new solar panels. When it comes to the silicon wafers, they first go through thermal processing to remove the silicon from the plastic covering. The evaporated plastic is reused as a heat source for this exact process.

All in all, 96% of the materials can be reused for new solar panels.

Manufacturers of quality solar panels have warranties that protect your panels from degrading too quickly. Most will guarantee 90% production after year 10 and 80% or more after year 20 or 25.

Once the manufacturer’s warranty runs out, they reach the end of what is known as their “useful life.” However, that doesn’t mean it’s the end of their actual life.

Just because they’re only producing 80% of the energy they did in year one doesn’t mean they’re not still providing value to you. In fact, they could be providing more value to you than they did in year one. How so? Historically electric rates have increased at a higher rate than solar panels degrade. So even though you’re producing less electricity, you’re saving more money because the cost of electricity has increased.

So to answer the question of how long solar panels last, at least a couple of decades, but that’s really going to be up to you. You’ll need to decide at what point it’s worth looking into new technology to replace them.

In June of 2018, Europe’s first recycling plant opened in Rousset, France. This first year, they set the goal to recycle 1,300 tons of solar panels, which is the same amount of panels that reached their life in France that year. By 2022, they aim to ramp up to 4,000 tons.

While there’s a process in place, there has not yet been a huge need for large-scale recycling of solar panels in the United States. And the industry is taking advantage of that extra time to make improvements to the recycling infrastructure and the process itself.

Below are the annual solar installations in the United States, according to SEIA and Wood Mackenzie. 20 years ago in 2000, very few solar installations were taking place. That means that there is not yet a huge amount of solar panels that have reached the end of their life and are in need of being recycled.

However, if you’re ahead of the curve and are looking for ways to dispose of your panels responsibly, reach out to SEIA about their National PV Recycling Program or visit SolarRecycling.org to find a list of vendors in your area.

What is the Future of Solar Panel Recycling?

By the end of the 2020s, there will be a significant amount of solar panels decommissioned and disposed of, and as solar keeps growing, so too must the recycling industry. According to Greenmatch.co.uk, 60 million tons of waste would be added to the world’s landfills by 2050 if they’re not recycled.

According to the same article, if all of these panels are recycled, enough raw materials will be recovered to make 2 billion new solar panels, helping to expand the spread of renewable energy without using any additional raw materials.

So if you’re considering solar but are wary of what will happen to them once they’ve reached the end of their life, rest assured there’s a process in place to responsibly dispose of them, and it will only keep improving.