Solar Panel Degradation and The Lifespan of Solar Panels

There are plenty of things that get better with age - like cheeses, cast iron skillets, high-quality leather, and 401Ks. However, this isn’t the case with a lot of equipment you invest in. Whether it’s a car, tractor, or complex machinery, most machines have a finite useful life.

Though a fantastic long-term investment for many businesses, farms, and homes, solar panels are no different in this regard. While deciding if solar is right for you, it’s important you understand their lifecycle. In this blog, we’ll go over how long you can expect your solar system to last, time’s effect on your panels, and what you can do to get the most out of your investment.

What is a solar panel’s useful life? Just like a lot of other equipment, solar panels don’t perform at 100% for their entire life and then just stop working in year 30. Instead, solar panels, at a very slow rate, produce less electricity as they age. This process is called degradation.

Because of solar panel degradation, most panels’ production warranties change as they age. Manufacturers typically guarantee 90% of the panels’ production until the first ten years. After ten years, that percentage drops back to 80% for the remaining 15 - 20 years.

After the system’s useful life, your panels can go on producing electricity. However, depending on your financial goals, you may want to replace your panels with new ones that will produce electricity at a higher rate. 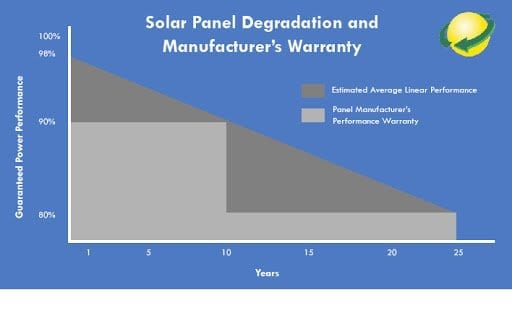 What is Solar Panel Degradation?

All solar panels slowly degrade over time, which means they’re producing less electricity from the same amount of sunlight. How and why does this happen? A variety of external factors (like weather) wear down on the panels and have a negative impact on their ability to produce electricity.

One way solar panel degradation happens is through microcracks that form in the silicon of the solar cells. These small cracks cause electrical connections to deteriorate, meaning there are fewer paths for those electrons from the sun to take, and thus less energy goes to your inverter and into your home, business, or farm. Other issues are junction box adhesion failures and discoloration.

Because there are a variety of ways panels can degrade, caused by a variety of factors, it’s a difficult problem to solve. Solar panel manufacturers are constantly evolving and coming up with ways to reduce that degradation rate so your panels can keep up their power output. But in the meantime, your panels are guaranteed to degrade at or below a specific rate, so you can rest assured your investment is a safe one.

And if your system is installed by Paradise Energy Solutions, you’ll get our Triple Ten Guarantee to make that investment even safer. It adds 10 years of guaranteed solar production, 10 years of system monitoring, and a 10-year workmanship warranty.

What Causes Degradation in Solar Panels?

There are many different factors that contribute to solar panel degradation, but many of them focus on something that’s pretty hard to control - the weather.

One common way microcracks form is through thermal cycling. When it’s warm, just about everything expands. When it’s cold, things contract. Solar panels aren’t immune to this, and it’s that constant back and forth that put them under strain and create those little cracks.

Similarly, strong winds can cause flexing of the panels - also known as a dynamic mechanical load. But as long as your solar system is installed by experts and you’re using panels of good quality, this shouldn’t be a major contributor to degradation. Extreme cold and hot weather, humidity, and snow and ice also slowly contribute to solar panel degradation, as do solar system components with different voltage potentials.

Another question we get is “does sunlight cause degradation?” - the very thing that makes solar panels tick! Thankfully, most solar panel manufacturers create panels with UV blockers that protect the panels from most damage, but yes - the sun itself does contribute to degradation.

In fact, your panels degrade at one of the highest rates just hours after installation when they’re first exposed to the sun and its UV rays. This is known as light-induced degradation (LID). Your panels can degrade 1 to 3% in this short amount of time, but after that, degradation slows way down.

How Fast Do Solar Panels Degrade?

On average, solar panels degrade at a rate of 1% each year. That’s backed up by the solar panel manufacturer’s warranty, which guarantees 90% production in the first ten years and 80% by year 25 or 30.

However, a study conducted by The National Renewable Energy Laboratory (NREL) shows a more accurate picture of solar panel degradation. This study took a look at the degradation rates for almost 2,000 solar systems across the world in a variety of climates and found that monocrystalline panels made after the year 2000 degraded at a rate of just 0.4% - less than half of the 1% rate used in the warranties.

While solar panels lose a few percentages right away due to LID, the degradation rate slows down significantly for the remainder of their lifetime.

How Can I Extend the Life of My Solar System?

Just like a car only runs for a certain amount of miles or a piece of equipment starts to lose its touch after so many years, solar panel degradation is bound to happen. However, you’re still making a solid investment that is going to reduce your company's overhead or your household’s monthly expenses.

But like regularly changing the oil in your car, are there ways you can extend the useful life of your solar panels?

Because solar panels don’t have any moving parts, there isn’t a whole lot you need to do. Your best bet is to plan for this before your system is installed. Even though solar panels are sturdy and built to withstand pressure - your panels could suffer a lot during a rough installation process.

You want to be sure that you’re working with certified industry experts that are going to install your system for the long run and with the utmost care, using high-quality panels and parts. This will go a long way for keeping your energy production high throughout - and even beyond - the system’s life expectancy.

Another factor you and your solar installer should consider when you’re designing your solar system is choosing a location. Try to avoid placing the panels near things that can cause physical damage, like the wind blowing trees and bushes against the panels, which may speed up degradation.

Though solar is a relatively care-free investment, periodic maintenance checks and cleaning can also help extend the lifespan of the solar panels. However, it’s imperative you work with products and companies that practice proper methods for cleaning and maintenance, as more harm than good could be done to your system.

What Happens to Solar Panels After 30 Years?

Just because your solar system has reached the end of its expected life doesn’t mean it still can’t produce energy and save you money. Manufacturers determine the solar panel’s “useful life” is over once the panels’ production dips below 80% - but that doesn’t mean it’s useless. The panels will continue to produce energy for many years to come but at a lower efficiency level.

Degradation is a normal, unavoidable part of owning solar panels. Nothing lasts forever, but the savings your solar system generates for you throughout its useful life could be saved or reinvested into your website. Some of our customers reach payback in as little as five years, which leaves them with two and a half decades of free electricity.