Solar Energy Vs Wind Power: Which is Better? 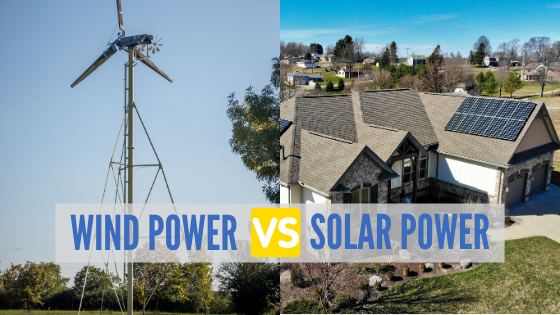 Coffee vs. water. Renting vs. owning. Hitting snooze vs. Getting up on time.

Our days are filled with competing choices. Some require hours of research, some we just know in our hearts.

For those looking to pay less for electricity, a choice they’ll have to make is whether to install solar energy or wind power.

Both energy sources have advantages and disadvantages over the other. In this blog, we’ll break them down, looking at what type of environment is suitable for each, how much each cost, and what you can expect as far as maintenance goes. Once you’ve finished, you’ll be able to make a well-informed decision on which option is best for you.

Is Your Area Better for Solar Energy or Wind Power?

One of the most important factors to consider when deciding between solar power and wind power is the environment and space you have to install either system.

What You Need to Install Solar Energy

To install a solar system, you’ll need to have a large enough plot of land or a large enough roof to hold the panels. This area will also need to be exposed to sunlight for the majority of the day, unobstructed by shade from things like trees or buildings.

How much space do you need for a system? The more electricity you use and the larger percentage of that electricity usage you’d like to cover, the more space you’ll need to install the solar system.

A home with a $120 electric bill each month would need about a 10 kilowatt (kW) solar system to cover their annual usage. This will take about 32 330-watt (W) solar panels, which would cover 324 sq. ft.

If you’re a business with an average electric bill of $600, you’ll need about 3,061 sq. ft. of space to hold your 157 330W solar panels. The good thing about solar energy is that panels can be placed on roofs, making use of underutilized space. Unlike wind turbines, solar energy systems don’t create noise, and they can very safely be installed in close proximity (even on) buildings.

What You Need to Install Wind Power

Wind turbines may seem like the winner in this respect, as the mechanism itself takes up much less space. However, turbines need to be installed a good distance from any obstructions for safety reasons.

The exact distance will vary from county to county but count on installing it far from any home or business. This is so that in case they fall, they won’t cause damage or harm, and denizens of the buildings won’t be troubled by the noise wind turbines create.

In order to produce electricity, wind turbines need to be in an area with frequent, sustained winds. In America, the windiest region is the Great Plains. Turbines are much less common on the East Coast, where the wind is more infrequent and there are more nearby obstacles to block the wind. The map below shows the average annual wind speed at a height of 30 meters (98.4 feet). 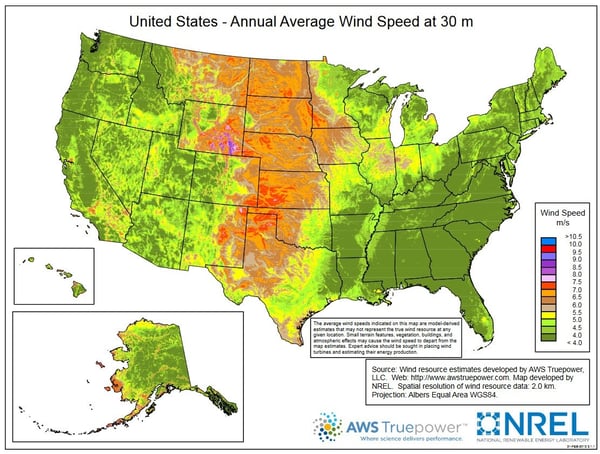 Taller wind turbines will be exposed to more sustained winds, as it’s windier at higher elevations. However, the ground below must be able to support the large turbine, and it’s likely that you’ll need to section off more space as a safety buffer. Taller turbines can also support larger propellers meaning it’ll generate more electricity, but this comes with a higher price tag.

To sum it up, solar energy will do better in an area that’s exposed to sunlight, and wind turbines will do better in a consistently windy area. While the actual mechanisms of your solar system may take up more space than a wind turbine, you can install them on your roof or on a small parcel of land anywhere on your property. With wind, however, you may have to give up a significant portion of land around the wind turbine.

What’s the Cost Per Watt of Solar vs. Wind?

Alternative energy lets you reduce your carbon footprint, take control of your own energy production, and save on taxes. It can also save you a great deal of money on electricity. In order to make the most of your alternative energy investment, you want to weigh the installation cost with the money the system saves you.

When it comes to the cost of installing solar energy or wind power, there are truly too many variables to give an accurate, one-size-fits-all answer. It will all depend on the size of the system, the environmental factors (such as exposure to sunlight or wind), and local ordinances and incentives.

The Cost of Installing Solar Energy

With each kilowatt-hour of free electricity your system generates, it starts to pay for itself. Businesses and farms with substantial monthly electric bills have solar systems reach payback in just a few years. With a lifespan of 25 to 30 years, this leaves decades of financial savings from free electricity.

The Cost of Installing Wind Power

Wind turbines that are for large, utility-scale purposes can cost millions of dollars. For smaller residential and commercial properties, the price will vary based on how high the tower is and the type of equipment you install. According to the American Wind Energy Association, you can expect to pay $1.50 per watt of generating capacity.

While wind turbines are the cheaper option in many parts of the country, they have a much higher maintenance expense than solar energy, and their dependence on wind doesn’t make them feasible everywhere. Solar, however, can still be profitable in very cloudy, rainy, or snowy areas of the country, like Upstate New York and Ohio. Learn more about how weather impacts solar energy.

How Much Does Maintenance Cost for Each System?

Both solar energy and wind power technology has significantly advanced since its early adoption. These advancements have helped lower their cost, but they’ve also led to very reliable products that can stand harsh elements and last several decades. However, both systems aren’t 100% maintenance-free.

One of the benefits of a solar energy system is that there are no moving parts, meaning there’s less that can go wrong, and less that needs to be maintained, compared to wind power. If something does go wrong, solar components are well guaranteed by their manufacturer.

Many solar panels come with 25, even 30-year warranties from the manufacturer, meaning faulty panels can be replaced for free up to three decades after they’ve been installed. Inverters, the part of the system most likely to fail first, are guaranteed for 12 to 25 years.

But manufacturer warranties don’t cover replacement labor costs. However, if you go solar with Paradise Energy, our Triple Ten Guarantee will cover labor costs for any warranty equipment for ten years. We’ll also monitor your production, and guarantee your system’s production.

There is very little that you’ll need to do to maintain your solar system. In most areas of the country, it won’t help to regularly clean the system, and you shouldn’t remove accumulated snow.

All these factors, even without the Triple Ten Guarantee, mean solar energy is much less expensive to maintain than wind power.

Because wind turbines have large, moving parts, there are quite a few things that can go wrong, and they often need ongoing maintenance. These maintenance costs can quickly eat away at the cost savings of wind energy.

From lubricating moving parts to checking connections within the system to discovering and correcting any unforeseen issues, wind turbines could require preventative maintenance two to three times annually. As your system ages, the frequency of these maintenance check-ups may need to increase.

These regular visits can cost thousands each year, quickly eating into your wind turbine’s payback.

Solar or Wind: The Final Verdict

That said, it’s important to note that you don’t need to live in Arizona, California, or Florida to make solar profitable. Even solar systems installed in areas of the country known for being cloudy, like Upstate New York or Ohio, can have systems that are very profitable.

While wind turbines are likely to be less expensive to install initially, they will cost much more over the lifetime of the system to maintain and operate. A solar system, on the other hand, will require little maintenance.

To sum it all up, we’re partial to solar (though we may be a little biased…). But in the end, either a solar system or a wind turbine can help you save a significant amount of money on your electricity bills each month. Either will also empower you to make a difference by reducing your dependence on non-renewable energy sources and creating a cleaner world for future generations.