How Does Shade and Bad Weather Impact Solar Panels?

Solar energy takes light from the sun and turns it into free electricity. But shade from nearby trees, roofs, or buildings can dramatically reduce the amount of electricity your solar system produces, even on sunny days.

In this blog, we’ll explain how shade affects solar panels, what equipment you can use to help optimize production, and how you can find out if your property is too shaded for solar.

Solar panels need constant and direct access to sunlight to maximize their electricity production. However, whether due to shading issues or cloudy days, solar panels can still produce some electricity through indirect sunlight.

A solar panel that’s shaded will produce less electricity than one that receives full sun. This can impact your solar system’s payback because anything that reduces the energy production of your system means less free electricity.

While you’ll want to minimize the amount of shade your solar panels receive, solar can still work in some spots that have partial shade. However, if your system is completely shaded the majority of the peak sun hours, solar power may not be the best option for you at this time, unless you’re able to remove the source of the shade.

How Does Shade Affect Solar Panels?

Each solar panel is composed of solar cells. Depending on the size of your panel, it will either have 64 cells or 72 cells. These cells are all connected within the solar panel, meaning what happens to just a few cells could potentially have an impact on the production of the entire solar panel.

The impact shade has on the solar panel’s production depends on where the shade falls on the panel.

Solar panels are broken down into three different sections. Each section is made up of one-third of the solar panel’s cells and has its own bypass diode. If something shades even just part of one of these sections, it will impact the production of all of the cells in that section. However, if the other two sections are free from the shade, they will continue to produce electricity.

Likewise, if two sections are all or partially shaded, one-third of the panel will be able to produce electricity. If the shade extends to cells in all three sections, then the solar panel will produce little to no electricity. 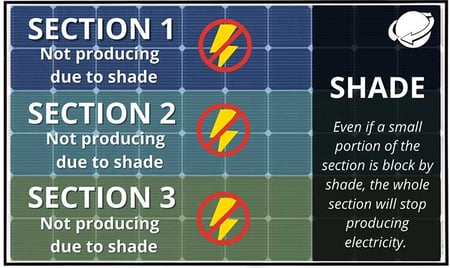 Without the bypass diode, shade in just one cell could impact the production of the entire panel, instead of just the shaded section.

Only a small amount of shade is needed to impact production. For example, the shadow cast by a telephone wire may only cover a few cells in the panel. But if that shadow spans all three sections, it will impact the production of all three sections of the solar panel.

What Happens if One Solar Panel is Shaded?

Not necessarily. This will depend on what type of equipment you install.

Shade on just one of your panels can potentially impact how much electricity the non-shaded panels produce. This will depend on the type of inverter you choose to install with your system.

Inverters are another essential component of a solar system. They turn the DC power produced by your solar panels into the AC power you can use at your home, business, or farm. There are three main options when it comes to inverters: string inverters, microinverters, and power optimizers + string inverters.

All the solar panels in a string can only produce as much electricity as the least-producing panel.

That means if you have one solar panel that’s partially shaded, all the other solar panels in that string can only produce as much energy as the shaded panel, regardless of how much sunlight they receive. Because of this, string inverters are less ideal for solar systems that are installed in a partially shaded area.

Microinverters, on the other hand, allow for panel-level production. Instead of one string inverter with multiple solar panels connected together, microinverters are installed on the underside of each and every solar panel.

Microinverters can be a good choice for installing solar in partially shady areas. However, while they will help increase your solar system’s production, they typically cost more than string inverters.

Power optimizers aren’t exactly a type of inverter. Instead, they’re added to systems with string inverters. Optimizers offer panel-level optimization, similar to microinverters. That means if one solar panel is partially shaded, it won’t impact the production of any other solar panel.

How to Determine How Much Shade You Solar System Will Receive

To sum up everything so far, shade has the potential to dramatically impact the amount of electricity your system produces. Because of this, it’s imperative to analyze the area in which you’ll install your system for shade before installation begins. 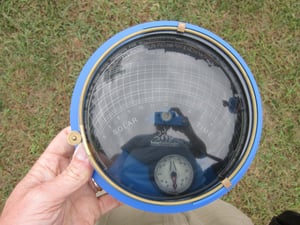 Before you receive an estimate for your solar energy system, the solar installer should come out and do an in-person visit. In addition to discussing your energy goals, they’ll analyze your property and determine the amount of sunlight your panels receive through a shade analysis.

To do this, the solar installer will use a tool called a Solar Pathfinder. This shows how much shade a specific area will receive at any given time of day at any given time of year. Using this tool will show whether or not the area in which you want to install solar panels receives a sufficient amount of sunlight.

Trees and other foliage can be removed to decrease solar panel shading. However, nearby buildings, powerlines, and other permanent obstructions cannot typically be moved to accommodate a solar system.

If you’re not quite ready for a site visit, you can get a rough estimate with the 1 - 3 rule. Measure the height of the object that casts shade, then multiply it by three. That’s a rough estimate of how far the object’s shadow will extend. You can then use that to see if the solar system will be impacted by the shadow from that object.

Is My Property Too Shaded for Solar Power?

The best way to determine if your area is too shaded for solar is to contact a reputable solar installer and have them come out and do a shade analysis. If your property does receive enough sunshine, they’ll be able to then take that information and design a system that meets your financial and electricity production goals.