Solar Inverter Clipping: What it is and when it could be a good thing 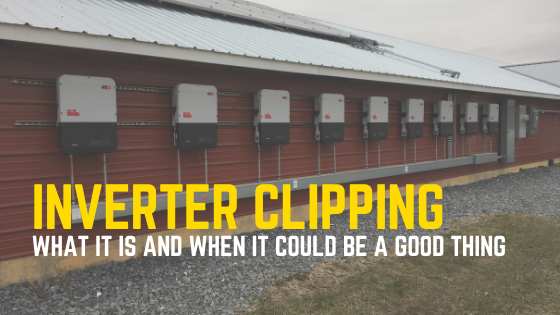 Inverters are the brains of a solar energy system. They’re charged with the critical task of converting the DC electricity produced by the solar panels into the AC electricity that is needed to power the equipment and devices we rely on each day.

What is Solar Inverter Clipping?

Solar inverter clipping occurs when the system’s power production exceeds the total amount of energy the inverters can handle at any given time. If the inverter’s maximum output rating is exceeded, they’ll reduce or clip the amount of electricity. 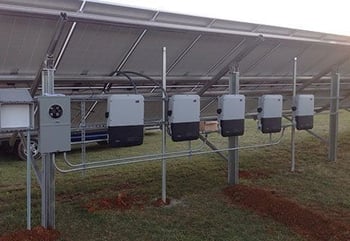 Clipping in a solar inverter shouldn’t damage any components of your solar system unless it’s at an excessive level. However, when inverter clipping does occur, it does reduce the amount of electricity available for you to use. It cannot convert all the solar power your solar array is producing, meaning you’ll be losing out on some of that free electricity.

When first discussed, inverter clipping sounds like it’s a bad thing you’d want to avoid. After all, losing out on free electricity is going to impact your solar system’s ROI. So by downsizing the number of solar panels you install or upsizing your inverters, you can reduce clipping and take full advantage of all the free electricity your panels can produce.

However, inverter clipping is sometimes a good thing for a solar system.

One way to understand the likelihood that an inverter will clip is by looking at the DC to AC ratio of your solar system.

The DC measurement in this ratio represents the amount of DC power your solar panels can produce. The more panels you have, or the more sunlight your panels get, the higher this number will be. The other component is the AC power rating of the inverter, which can be found on the equipment’s specifications sheet.

The heavier the DC portion of the ratio is, the more likely it is that the system will clip. A system with an oversized solar array (more DC) may cause you to lose out on some of your electricity production. A system with a large inverter (more AC) is less likely to clip but can be unnecessarily expensive.

There are consequences to having a ratio that leans too heavily towards both DC or AC. A ratio that relies on a high amount of DC input power can void the warranty of the inverter. A ratio too heavy on the AC side could put excessive stress on the AC components, causing them to wear out more quickly.

However, newer inverters can self-limit by reducing DC input power without causing any stress to the components. And as long as your system is appropriately balanced, routine clipping shouldn’t cause any issues with your equipment.

Inverter clipping does mean lost power. However, if your system is designed correctly, a small amount of clipping can actually create a better return on your investment.

The amount of energy your solar panels are producing will fluctuate with the amount of sunlight they receive. This changes hour by hour, day by day, and season by season. Your PV system is churning out a lot more electricity on a sunny day in July than it would on a snowy day in January.

With all that fluctuation, your solar panels may only generate their peak power on rare occasions. If you spend thousands of more dollars to upsize your inverters to accommodate this occasional peak, you likely won’t get that money back.

To make the most of your investment, your PV solar system should keep the inverters operating right around the inverter’s maximum input rating for as many days of the year as possible. But if the inverters are too small, the energy lost from inverter clipping will be too great on the sunnier days with higher production.

To sum it up, intentional inverter clipping can be a stepping stone to a more efficient solar system if appropriately designed.

Why Solar Inverter Clipping May Sometimes Be Necessary

Another reason to allow for some clipping is to better suit a specific site and the components already at that site.

And last but not least, inverters can be a relatively costly component of a solar system and are the cause of most maintenance issues that our service technicians come across. For these reasons, adding additional inverters to accommodate a small amount of extra production may not be in your best interest financially.

More Panels vs. More Inverters: Which is Better?

When you’re analyzing your solar panel’s maximum power output to your solar inverters clipping limits, you’ll want to find the optimal balance for your financial goals.

The decision comes down to what is costlier: the savings lost from the lost energy due to inverter clipping or the money spent on additional or larger inverters?

If you need help determining which is best for you, connect with our team of solar experts. We will design a system based on the goals you have in terms of production, budget, and long-term savings.