Third-Party Energy Suppliers: Do I Need One? 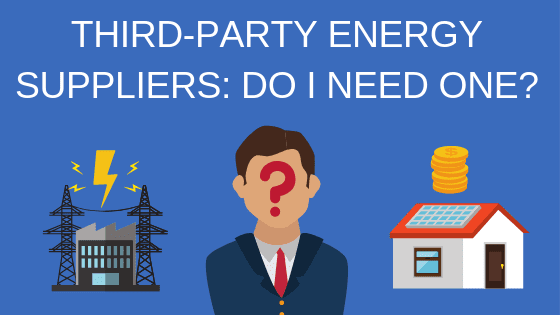 Many states in the country allow you to sign up for a third-party energy supplier. While these companies introduce competition into the energy market and give consumers more options, knowing whether or not they’re right for you can be tricky, especially if you have a solar system.

What is a Third-Party Energy Supplier?

First, let’s talk about the difference between a utility company and a third-party energy supplier. A utility company is a company that owns the poles and wires. They produce electricity, and they deliver it to your home, business, or farm. A supplier, on the other hand, sells that energy for you to use.

Here’s how it works: a third-party electricity supplier buys energy from the utility in bulk. Then, they sell that energy to consumers at a different rate (which is often less than the utility’s rate, at least to start). These companies are go-betweens or middlemen.

If you live in a state that does allow third-party suppliers, should you make the switch?

If you have solar energy, you should not switch to a third-party energy supplier. If you do not have solar, you could potentially save money and may want to switch, depending on the supplier and your situation.

In this blog, we’re going to take a look at using a third-party electricity supplier for both of those instances.

Do You Need Third-Party Electricity With Solar?

If you are contacted by a third-party energy service after you install a solar system, in most cases, signing with them could cost you a lot of money. The big factor in this losing out on net metering.

Net metering (as long as you live in one of the 38 states that have it), gives you credit for kWh produced by your solar system that were not used at the time of production.

Your solar system cranks out kWh when the sun is shining. In many cases, your system produces more electricity than you use at that time, meaning there’s “extra” electricity. With net metering, that extra power goes to the grid, and you receive a credit on your electric bill for each kWh.

When your solar system is not producing energy (like the middle of the night) but you need electricity, you draw power from the grid for “free” until your credit runs out.

Net metering is important to solar energy’s payback. Without it, you’re only offsetting your electricity costs when you’re using electricity while the sun is shining. Losing out on net metering means you’re wasting tons of kWh, which could cost you hundreds or thousands over the course of your system’s lifespan.

Here’s an example. Say you’re paying $0.12/kWh through your local utility, and a third-party supplier calls you up and offers you a $0.10/kWh fixed rate for electricity. A $0.02 reduction in electricity for no upfront investment or work? Sounds like a no brainer!

But what are you losing?

If you have a grid-tied solar system with net metering, you’re losing a lot.

Say your 13 kW system produces around 15,000 kWh each year. That’s 41 kWh a day. For the average homeowner, you’re at work while the sun is up. Maybe you have a few appliances running while you’re out and a few lights on. We’ll say you use 15 kWh of electricity during the day while you’re away and while your solar system is producing 41 kWh (for reference, an average washing machine uses about 0.5 kWh an hour).

That means you’re not using 26 kWh that have been produced by your system, but you could probably use that energy when you come home, right? But you’re not drawing from your solar system because the sun went down and it can’t produce. If you have net metering, you can draw on the credit from those 26 kWh while the sun is down, meaning free power for your family. If you don’t have net metering, those 26 kWh are lost.

Instead of using free electricity generated by your solar system, you’ll have to purchase those 26 kWh at the $0.10/kWh rate. That’s $2.60 a day, which adds up to $949 a year. Multiply that by the 30-year lifespan of your solar system, and you’re talking big money!

Even if you’re offered a lower electricity rate by a third-party energy supplier, with solar, the price of foregoing net metering will likely never make it worth it.

What If I Have Solar and Already Switched to a Third-Party Energy Supplier?

So you’ve installed a solar system and have switched from your utility to a third-party supplier. Though you may have a lower electricity rate, you’re missing out on net metering, which is costing you much more in the long run. What are your options?

Many third-party energy suppliers require you to sign a contract. The duration of this contract and the agreements vary on a supplier-by-supplier basis and a customer-by-customer basis. While breaking or canceling a contract isn’t something you should do lightly, it may be your best option.

If the fee to back out of the third-party energy supplier’s agreement is very high, you may still want to consider canceling your contract and going back to your original energy supplier, which will cover 100% of your electricity needs and will allow you to take advantage of net metering.

What If I’m Thinking About Going Solar and Want to Switch to a Third-Party Energy Supplier?

If you’re thinking about going solar, you do not want to sign up with a third-party supplier. Though you may be getting a cheaper electric rate, you won’t be able to take advantage of net metering, which is a huge part of your renewable energy savings.

What If I Don’t Have Solar, and I Don’t Plan on Getting It?

If solar is not for you but you’re still interested in saving some money on electricity, a third-party supplier could be a way to do that. Third-party suppliers offer an alternative to your traditional utility electric company, and in order to attract customers, they have to go above and beyond.

Oftentimes this could be achieved through cheaper rates, more flexible agreements, or fixed rates. Fixed rates, as opposed to the typical variable rates, do not fluctuate with the energy market.

If you have a variable rate, your electricity could be $0.11/kWh one month and $0.12/kWh the next month. With a fixed rate, you’ll pay the same amount for the time period denoted on your contract, making budgeting easier and taking out the risk of a variable rate.

However, there are a few things you should be aware of before jumping into a third-party energy supplier.

Keep a sharp eye out in the contract for anything that would allow the third-party supplier to raise their rates suddenly and at any time. Though you’re signing up for a much cheaper electricity rate, this ability could erase all those savings leaving you locked in a contract at a much higher rate with a steep termination fee separating you from market price electricity.

Whether you’re one of our customers or not, we want your solar investment to have the absolute best payback for your home or business that it can. If you have any questions regarding third-party energy suppliers, your utility bill after solar, or anything relating to solar energy at all, please give us a call or send us a message.