One of the most important things you’ll get to see in your solar proposal is the estimated productivity of your system. This number will tell you how much free electricity your solar system will produce.

If this number is accurate, you’ll have a clear look at how much money you’ll save on electricity and how long it’ll take for your solar system to pay for itself.

But as you may have guessed, there are a lot of factors that go into the production estimate. Calculating your solar production is more than just multiplying the panels’ noted production on the spec sheet by the number of panels included with your system.

Everything from the location it’s installed to the way the components function can impact the production of your system.

What goes into calculating the production of a solar system?

Starting with Your Area’s Sunshine

To find the production of a solar system, a solar installer will start with the solar panels and the amount of sunshine that hits a location (which will vary based on where you live and the weather patterns in your area). Then, they’ll start to calculate the losses for your specific site and system to come up with a good picture of what your system can do.

In this blog, we’ll touch on the ways your solar system can lose production. This list may seem long - like there are too many drains on your system’s productivity to make solar worth it. But that isn’t the case. Each item may only cause a minuscule loss in productivity.

Despite these losses, solar can still be a very profitable investment with a front-loaded payback thanks to incentives. It will also serve as a means of producing your own, free electricity for decades.

Irradiance losses are caused by factors that inhibit the sun’s energy from reaching your solar panels. They include things like the tilt of your solar panels, shading (whether from the surrounding terrain, trees, or buildings), soiling, snow, and something known as the incident angle modifier.

Solar panels produce electricity by drawing energy from the sun. The less energy that reaches the panels, the less electricity they’ll generate. So to optimize your production, you’ll want to install your solar panels at an angle and in the direction where they get the most direct sunlight.

Solar panels will generate less electricity when the sunlight enters at an angle, and more when the sunlight hits the panel perpendicularly. This is known as the incident angle modifier. The angle of the tilt will vary with the latitude in which your system is located. As a general rule of thumb, the closer the tilt of the solar array is to the location's latitude, the more the array will produce. .

At the equator, you’d want to install your solar panels completely flat. In our installation area, the ideal tilt ranges from about 37° (central Virginia) to 44° (Northern New York). Irradiance losses come into play, however, when your installer can’t install solar panels at this angle. For those installing roof-mounted systems, the tilt angle will be dependent on the tilt of the roof. 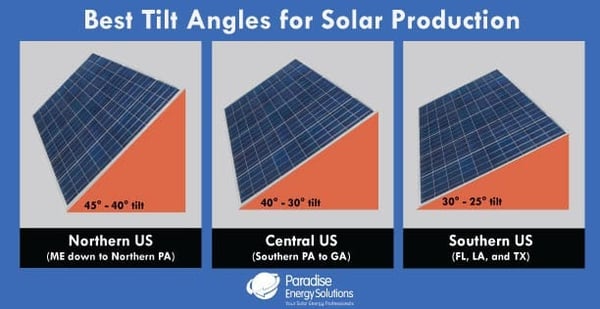 In addition to the tilt is the orientation of the panels. You’ll want the panels to face as close to true south as possible to extend their exposure to sunlight throughout the day.

While both the tilt and orientation play a role in how much energy your solar system produces, your property may not allow you to install a system in the optimal manner. If you opt for a roof-mount solar system, your panels will likely be installed at the tilt of your roof. And depending on the orientation of your building and available roof space, the panels may need to be oriented to the west or the east.

If you can’t meet these factors perfectly, installing solar can still be beneficial. The loss in production for both of these factors is relatively small in the grand scheme of your system and can be made up with the addition of a few extra solar panels.

Anything that casts a shadow on your solar panels stands between you and free electricity. Be that nearby trees or buildings, these can reduce the production of your system. If possible, shade should be avoided, either by finding a sunnier spot to install the panels or removing the source of shade (if possible).

Depending on the terrain surrounding your building, shade can also come from nearby hills, mountains, or plateaus. This is known as horizon shade. For example, if you live at the foot of a mountain, the sun will dip below the mountain/horizon far earlier in the day than if you live in a very flat area. This reduces the hours of the day your solar system is exposed to sunlight.

Like shade, the more that comes between the face of your solar panels and the sun, the less electricity the system will produce. This includes dust and dirt that could accumulate on the solar panels.

In most areas of the country, it rains frequently enough to keep the dust and dirt from accumulating heavily enough to have a huge impact on the system. However, the dryer and dustier the climate is, the more likely it is that soiling will have a measurable impact on your system.

While the impact is small, it’s still a factor that should be taken into account to get the most accurate solar production estimate.

When it snows, flakes can accumulate on your panels, block the sunlight, and inhibit your solar system’s production. Solar panels are designed to allow for snow to quickly melt and slide off the panels, shortening the time they stay covered.

Depending on what area of the country you live in, this may or may not have a measurable impact on the production of your system, but it’s something solar installers should account for.

Please note: the loss of production due to snow is minimal. Cleaning snow off solar panels can be a danger to you, your system, and your warranties. We don’t recommend clearing snow off your system.

DC (Direct Current) losses are electrical losses that happen after the solar panels harness sunlight but before the energy is transmitted to the inverter(s).

Various factors can impact the amount of irradiance of each panel, like soiling, shade, and snow. When one panel is producing more or less than the other panels in the system, this could lead to the loss of energy. The temperature of the panel can also be a factor here. The warmer a panel is, the less energy it will contribute.

Solar panel manufacturers conduct rigorous testing to paint an accurate picture of their solar panels’ output. To control for variables and give a reliable baseline, these tests are conducted under what is known as standard testing conditions (STC), where temperature and irradiance are controlled.

The solar panel’s predicted output is a great way to estimate power production, but it isn’t always perfectly accurate. The module’s power rating may vary slightly. However, today’s solar modules are designed to produce at least their rated output, if not more.

Degradation is a normal, unavoidable, and slightly frustrating part of solar panels. Just like so many appliances, it loses efficacy as it slowly ages over the 30+ year lifespan of the system.

Light-induced degradation is slightly different, in that it happens all at once during the first few hours that the panels are exposed to light. It’s when the panels degrade at the highest rates.

In just the first few hours, your panels can degrade 1 to 3%. However afterward, degradation slows down by a great amount to the manufacturer-specified degradation rate, which is protected under warranty.

When it comes to solar systems, where there’s resistance, there is often power loss. Such is the case when it comes to the wiring and soldering connected inside the solar panels. These connections reduce how much electricity solar panels can produce by adding electrical resistance to the circuit.

Solar panels are connected together in what is referred to as strings. In a string, each panel is connected to another through wiring. There is some loss as the energy travels through the wiring in the string due to the resistance to the circuit.

AC (Alternating Current) losses happen once the DC power goes to the inverter and before it is consumed in your building.

Inverters do this with great efficiency, but not perfect efficiency, meaning some power is lost during the conversion process. Depending on the inverter brand, type, and model, you can expect your inverter(s) to run at about 96-99% efficiency.

Sometimes, your solar panels produce a little more energy than your inverter(s) can handle. In order to keep things in check, the inverter will trim the output of electricity to the amount that it can safely convert. When this is happening, you’ll be losing some of the electricity generated by your panels.

Other items that impact solar production

1. Age of the solar panels

We talked about light-induced degradation - when solar panels lose a bit of their production ability during the first few hours of exposure to sunlight. After the first few hours, the panels don’t stop degrading all together, but they do slow down a substantial amount.

There’s no concrete, defined scenario that is included in this category. Instead, it’s a catch-all for items not accounted for above. The company doing your solar estimate will go with a value they feel comfortably reflects the variability of your system’s production.

What Your Solar System Produces

Despite all these factors that eat away at your solar system’s production, it’s still a remarkably beneficial and efficient technology that can have a real positive financial impact on your home, farm, or business.

These factors will all be included in your solar proposal’s production estimate, meaning what you see is (just about) what you’ll get. And if you choose to go solar with Paradise Energy, you’ll get exactly what you see, thanks to our unique Triple Ten Guarantee. Included in this is our production guarantee, which states that if your solar system doesn’t produce at least what we estimate it will, we’ll pay you the difference.