What’s the Lifespan of a Solar Battery?

Whether it’s to keep critical loads running during a power outage or to strategically offset demand charges for a less expensive electric bill, solar storage can be extremely useful to solar owners. Solar batteries offer free energy generated from your solar system at the time when you need it most. 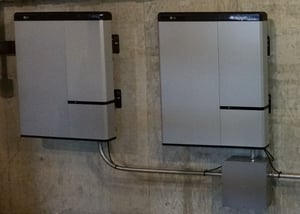 However, investing in a solar storage system will cost money upfront. Before you make the decision to install solar batteries, you should first understand how long they’ll last, and how frequently you’ll need to replace them.

In this blog, we’ll take a look at the lifespan of a solar battery, and we’ll discuss the factors that impact how long your solar battery will last.

How Long Will Solar Batteries Last?

Most solar batteries on the market today will last somewhere between five to 15 years. While that is a significant amount of time, you’ll likely need to replace them within your solar system's 25 to 30+ year lifespan.

Factors That Determine the Lifespan of Your Battery

You may be asking why this is such a varied range. There are a couple of factors, including the type of battery you install, how often you use the battery, and where the battery is stored, which significantly impacts how long the battery lasts.

How Often You Use the Batteries

You’ve probably noticed that your laptop or smartphone battery won’t last as long between charges after a couple of years. A fully charged battery may have lasted 12 hours when it was new. Now, it lasts three.

This is frustrating, but it’s inevitable when it comes to batteries. The more often you charge and discharge your battery, the less time the charge will last. After a certain amount of cycles, your batteries will no longer be able to store and discharge enough energy to make their use worthwhile.

That’s why the number of years batteries will last vary so greatly. It’s not based on how many years they’ve been installed but instead on how often each solar owner uses them. If you have an off-grid system that uses battery power each night, your batteries won’t last as long as if you had a grid-tied system that only uses your batteries when the power goes out.

One way to help encourage your batteries to last longer is to pay attention to the manufacturer’s recommended depth of discharge, or DoD. DoD is the percentage of the battery’s stored energy you use. For example, your battery’s capacity is 13.5 kWh, and you use 10 kWh of its charge. The depth of discharge would be 74%.

DoD is important because pushing your battery beyond its recommended DoD can significantly shorten your battery’s lifespan. Manufacturers will assign each battery type a recommended maximum DoD.

The Battery Type You Install

Three types of batteries are commonly used in solar storage: lead-acid, lithium-ion, and saltwater. Of these three options, lithium-ion batteries will last the longest. They also tend to offer the best storage capacity but likely won’t be the least expensive option.

However, with the anticipated cycle length several times that of other options, the extra money could certainly be a worthwhile investment, saving you money in replacement costs down the road. Lithium-ion batteries also have a high DoD rate, often up to 80%, meaning you’ll be able to use more of your stored energy without harming the battery.

The other popular option today is lead-acid batteries. For years, their relatively low price and high watt-hour capacity have made them a mainstay in off-grid solar systems. Compared to other options, however, they last for far fewer cycles, meaning their lifespan will be the shortest.

Lead-acid batteries also have a lower DoD rate - sometimes between 30% and 50%, meaning you can only use a portion of the energy that’s stored in the battery. While they may be less expensive upfront, you’ll likely have to replace them more frequently which could cost more in the long run.

Another thing to take notice of when choosing a solar battery is the warranty offered by the manufacturer. Many manufacturers will guarantee their batteries for a specified number of cycles, or a specific time period, meaning you won’t be on the hook if you end up with a product that isn’t up-to-par.

The Environment in Which the Batteries are Stored

Neither a hot nor extremely cold environment is ideal for batteries. If you’re able to store the batteries in a garage or basement, or a part of the building that’s out-of-the-way and somewhat temperature-controlled, your storage system can last longer than if you had the batteries exposed to the harsh elements.

In warmer temperatures, the chemical reaction in the batteries will happen more quickly, which decreases the battery’s lifespan by increasing the wear and tear on the battery. In extreme cold, the electrons slow down, and the chemicals won’t last as long as they typically would, meaning the battery will drain much more quickly.

Saltwater batteries will perform best at temperatures above roughly 23°F and below 104°F, giving them a slight edge over lead-acid batteries. However, they are not quite as hearty as lithium-ion batteries.

With a five to 15-year expected life, solar batteries will likely have to be replaced at least once over the 25- or 30-or-more lifespan of your solar system. But by taking the proper care when using your battery, opting for quality products with good manufacturer guarantees, and installing the battery in a climate-controlled location, you can rest assured your battery will last a long time.

While batteries have become more affordable in recent years, they will still likely require a significant investment. It’s important to us at Paradise Energy that you make the right decision and end up with a solar storage system that meets your unique goals. If you’re interested in a battery backup system, feel free to reach out to us with the button below.

In the meantime, make sure to sign up for our four-part video series on solar batteries.