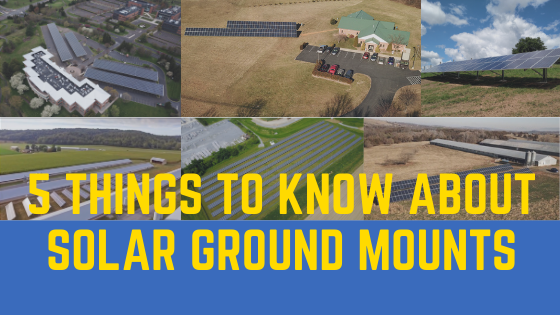 Are you thinking about installing a solar energy system?

If so, congratulations on taking the first step towards gaining control of your electric bill and shrinking your carbon footprint! This one investment can bring decades of free electricity, substantial tax savings, and helps you make a difference in the environment and your financial future.

But before you dive in, you’ll want to determine what kind of solar system you should install. And by that, we mean a roof-mount system or a ground-mount system. There are pros and cons to both methods, so the best option will depend on your situation.

If you’re thinking about installing a ground-mount system, there are five things you need to know first.

What you should know before installing a solar ground mount

1. There are Two Types of Ground-Mount Systems

When you think of ground-mounted solar panels, an image of a standard ground-mount system is probably what pops into your mind. Metal poles are drilled deep into the ground with a post pounder to securely anchor the system. Then, a framework of metal beams is erected to create the supporting structure on which the solar panels are installed.

Standard ground-mount systems stay at a fixed angle throughout the day and seasons. The degree of tilt to which the solar panels are installed is an important factor, as it impacts how much electricity the panels will generate. Additionally, the direction the panels face will also have an impact on production. South-facing panels will receive more sunlight than north-facing panels.

A standard ground-mount system should be designed to maximize exposure to sunlight and installed at the optimal tilt angle to maximize electricity output. This angle will vary with geographic location.

The sun doesn’t stay in one place throughout the day or the year. That means a system installed at a fixed angle (standard-mounted system) will produce less energy than a system that is dynamic and adjusts the tilt along with the sun’s daily and yearly movement.

This is where pole-mounted solar systems come in.

Pole mounted systems (also known as Solar Trackers) make use of one main pole drilled into the ground, which will hold up several solar panels. Pole mounts are often installed with a tracking system, which will move your solar panels throughout the day to maximize exposure to the sun, thus maximizing their electricity production. They can rotate the direction they’re facing, as well as adjust the angle in which they’re tilted.

While maximizing the productivity of your system sounds like an all-around win, there are a few things to know. Tracking systems require a more complex set up and depend on more mechanics. This means they will cost more money to install.

On top of the added costs, pole-mounted tracking systems can require more maintenance. While this is a well-developed and trusted technology, tracking systems have more moving parts, so there’s going to be a higher risk of something going wrong or falling out of place. With a standard ground mount, this is much less of a concern.

In some situations, the additional electricity generated by the tracking system may compensate for the added cost, but this will vary on a case-by-case basis.

A solar carport is a variation of the standard ground mount. Instead of being lower to the ground, the panels are suspended high enough to shelter vehicles.

Carports are typically installed over parking lots or in driveways, providing parked cars protection from the elements and providing the owner with cost- and emissions-free electricity. Solar carports help optimize otherwise underutilized space and can be a great place to install electric vehicle charging stations.

That said, because they need to be higher off the ground than a typical standard ground mount, they will cost more to install.

Compared to a roof-mounted solar system, ground mounts will most likely be the more expensive option, at least in the short term.

Ground-mount systems require more labor and more materials. While a roof mount still has a racking system to hold the panels in place, its main support is the roof on which it’s installed. With a ground-mount system, your installer needs to first erect the sturdy support structure with steel beams drilled or pounded deep into the ground.

But, while the installation cost may be higher than a roof mount, that doesn’t mean it’s the best option long term. With a roof mount, you’re at the mercy of your roof, which may or may not be suitable for solar. Some roofs may not be able to support the additional weight of a solar system without reinforcements, or you may need to replace your roof. Additionally, a north-facing roof or a heavily shaded roof can severely reduce the amount of electricity your system generates. These factors could make a ground-mounted solar system more appealing than a roof-mounted system, despite the increased installation cost.

Compared to a roof mount, a ground-mounted system may produce more energy per watt of solar installed.

Solar systems are more efficient the cooler they are. With less heat present, there will be less friction as the energy transfers from the solar panels to your home or business.

Solar panels installed on roofs sit just a few inches above the roof. On sunny days, roofs unobstructed by any type of shade can warm up quickly. There is little space below the solar panels for ventilation.

With a ground mount, however, there will be a few feet between the bottom of the solar panels and the ground. Air can flow freely between the ground and the panels, helping to keep the temperature of the solar system lower, thus helping them be more efficient.

In addition to a slight boost in production from cooler temperatures, you’ll also have more freedom when it comes to where you’ll install your system, the direction it faces, and the panels’ degree of tilt.

If optimized, these factors can provide gains in productivity over a roof-mount system, especially if your roof is poorly situated for solar. You’ll want to choose a spot that’s free of shade from nearby trees or buildings, and preferably orient the system south. South-facing systems will receive the most sunlight throughout the day.

Additionally, your installer can design the racking system to tilt at the optimal degree for your location. With a roof-mounted system, your solar system’s tilt is restricted by the pitch of your roof.

4. You'll Have to Set Aside a Portion of Land for the Ground-Mount System

While ground-mount systems allow you to choose the best place to install your solar system in regards to production, you need to dedicate that area to the solar system.

The amount of land will vary with the size of your solar system. A typical home with a $120/month electric bill would likely need a 10 kW system. A system of this size would cover roughly 624 square feet or .014 acres.

If you have a farm or business, your electric bill is probably much higher, and you’d need a bigger solar system. A 100 kW system would cover a $1,200/month electric bill. This system would span roughly 8,541 square feet or about .2 acres.

Solar systems will last decades, with many high-quality brands offering warranties for 25 or even 30 years. Keep this in mind when selecting where your system will go. Make sure you don’t have future plans for that area.

Especially for farmers, giving up land means giving up income. In some cases, you can install a ground-mounted system that’s several feet higher off the ground. This can allow the clearance required for growing crops underneath the panels. However, this will come with an added cost, which should be weighed against the profit of those crops.

Regardless of how much space is below the panels, you’ll have to maintain any vegetation that grows around and underneath the system. You may also need to consider security fencing around the system, which will require additional space. Fences need to be installed a safe distance in front of the panels to prevent shading issues on the panels.

5. Ground Mounts Are Easier to Access - Which is Both Good and Bad

Ground-mounted panels will be easier to access over panels installed on rooftops. This can come in handy should you need maintenance or repairs for your panels. It’ll be easier for solar technicians to access ground mounts, which can help keep costs down.

That said, ground mounts also make it easy for unauthorized people and animals to access your system. Anytime there is intense pressure on the panels, whether it be from climbing on them or hitting them, it can accelerate the degradation of your panels, and curious animals may even chew on wiring.

Oftentimes, solar owners will install a fence around their ground mount system to keep out unwanted visitors. In fact, this may be a requirement, depending on your system’s size and the local rules. The need for a fence will be determined during the permitting process or during the inspection of your installed solar system.

Should You Install a Ground-Mounted System?

Ground-mounted solar systems are a great option for those interested in going solar. While they may cost a bit more than a roof-mount system, ground-mount systems give you more freedom on the location and placement of the solar panels. They can be designed and installed for optimal production, instead of being limited to the pitch and direction of your roof.

That said, you’ll want to be sure there is an appropriately sized piece of land available to install the system that gets plenty of sunlight and be prepared to fence in and maintain the vegetation around the system.