Will Solar Panels Be Cheaper in the Future? 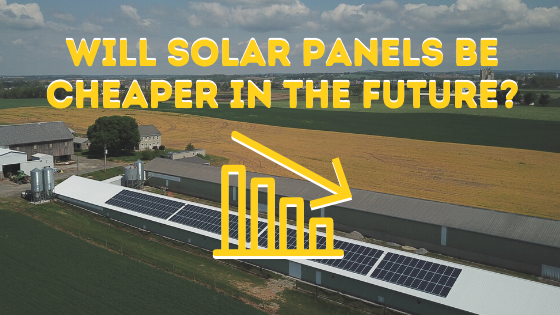 While the technology that transforms sunlight into electricity has been around for decades, it wasn’t until the 2000s that solar power really took hold and became a practical energy alternative. As the solar industry matured and technology improved, components became more efficient, and the cost to install a solar system began to plummet.

By the 2010s, solar energy had transitioned from a passion project for the wealthy and environmentally conscious to an affordable, cost-saving way for businesses, homes, and farms to generate their own emission-free electricity.

The last decade brought a sharp decline in the cost of going solar. Will this decline continue into the 2020s? We’ll take a look into the story of solar’s declining costs, and where the solar industry expects prices to go in the next five or ten years.

How Much Has the Cost of Solar Decreased?

What is the cost of solar in 2020? Today, that 50 kW system could cost you just $112,500 before incentives. With widely-available incentives for all tax-payers looking to own their own solar system like the federal solar investment tax credit and accelerated depreciation for businesses, that system could cost around $83,250, or even less if local incentives were available.

That’s less than $1.70 per watt. A system that size would all but eliminate an electric bill up to $600 each month, quickly paying for itself and generating thousands of savings over the course of its 30+ year lifespan.

But regardless of size, it’s safe to say solar has decreased dramatically over the past two decades (about 80%), making it both financially and environmentally beneficial.

What Caused the Cost of Solar to Decrease?

You only have to turn toward your smartphone to see how rapidly technology advances. The small device you keep in your pocket or purse, and may even be holding as you are reading this, contains more computing power than NASA’s Apollo 11 guidance computers, which took human beings to the moon in 1969.

In addition to increasing power and decreasing in size, your smartphone is also much less expensive than NASA’s old computers (even if it’s an iPhone).

The same principle applies to PV solar technology. But there are a few other factors that helped with solar’s dramatic decrease in price.

As technology got better, the efficiency of the panels increased. This means that more electricity can be generated by a single panel and that fewer panels would be needed to meet your energy goals.

Will the Cost of Solar Continue to Decrease?

It’s unlikely that we’ll see the continuation of the dramatic decrease in price from the last two decades in the 2020s, but we do expect to see some decreases in price.

As the solar manufacturing and installation process becomes more and more efficient, there is less and less room for the “hard costs” to decrease, meaning “soft costs” make up a larger portion of the price. Hard costs are things like the panels and solar inverters themselves. The soft costs are things like permitting and financing.

Soft costs make up 64% of the cost of a residential solar system, according to the US Department of Energy. These costs are more likely to increase with inflation, contributing more and more to the cost of your solar system. While hard costs may continue to decrease, they will have less of an impact on the overall price of installing a system.

However, the overall cost still hasn’t reached its lowest point, at least not according to the BNEF New Energy Outlook 2019. Bloomberg and their 65 market specialists predict that overall, the cost of solar will decrease by about 34% by 2030.

While it doesn’t quite match the 80% decline we saw from 2000 to 2020, it shows that the cost of going solar is still moving in a downward direction.

Should You Wait to Go Solar?

If the cost of solar will continue to decrease, are you better off waiting a few years to install solar on your home, business, or farm?

There are two main reasons waiting ten years for that estimated 34% decrease in price isn’t worth it: missing out on the solar investment tax credit, and having to pay thousands of dollars for your electric bill while you wait.

You'll Miss Out on the Federal Tax Credit

One of the biggest boosts to the American solar industry was the Solar Investment Tax Credit (ITC) instituted by the federal government in 2006. This allowed federal tax payers to recoup 30% of their solar system’s installation costs through a tax credit. The credit made going solar cheaper and encouraged many to invest in solar energy. This gave the industry the resources it needed to make the technological and manufacturing advances that lowered the cost of installation.

The declining costs to install solar systems proved that the ITC worked, so much so that the federal government is beginning to phase out this incentive. 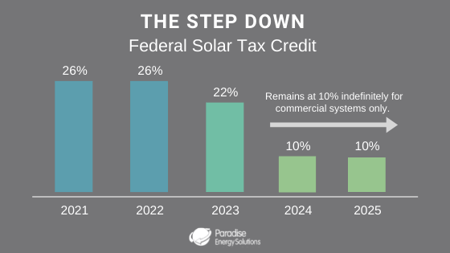 Waiting just two years could cause homeowners to pay 26% more for their solar system, and businesses to pay 16% more. Even waiting until 2023 could cost 4% of the system’s cost, which is still a substantial amount of money.

The Cost of Solar For Homes

The Cost of Solar For Businesses

Consider the Money You’ll Spend on Utility Electric While Waiting

One of the biggest benefits of going solar is the money it saves you by replacing electricity purchased from the utility company with electricity generated by your solar system for free. Each month you go without solar is another electricity bill you pay unnecessarily.

Let those add up over a year, two years, or more, and you’re talking about a sizable amount of money you could have kept in your pocket or invested elsewhere.

With manufacturers guaranteeing their panels up to 25, or even 30 years, solar panels produce free energy for decades. And just because their manufacturer’s warranty expires doesn’t mean your panels will stop producing energy. You can expect your solar system to go on producing electricity for decades. The sooner you start taking advantage of them, the less money you waste paying the utility company.

Don’t Miss Out on Solar’s Savings Because You Waited

The cost of going solar has decreased about 80% from 2000 to 2020. While this decline in price had a huge impact on the solar industry and the adoption of solar panels across the country, it is not likely to continue decreasing at such a rate.

If you would like to get pricing and see how much solar energy could save you, fill out our quote request form using the button below.

That said, if investing in solar isn’t in the cards for you right now, as long as the sun keeps shining, solar will still be a good investment years down the road. Download our free solar buying guide for an in-depth look at the process so you're ready to go when the time is right.