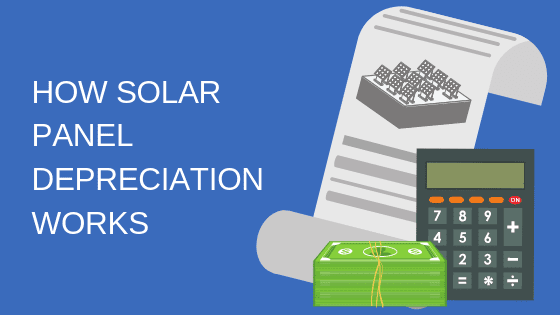 Depreciation on solar panels is one of the easiest ways businesses and farms looking to go solar can keep installation costs down, ROIs high, and paybacks short. The Tax Cut and Jobs Act of 2017 brought with it the option of 100% bonus depreciation on solar systems - which is often a great way for businesses to quickly recover costs associated with integrating solar energy.

Put simply, depreciation is a decline in an asset’s value over time. Your business can use this to recover costs from purchases as the equipment’s value degrades throughout its lifetime.

There are a few different ways to expense depreciation, but we’re going to focus on depreciating your solar system using the Modified Accelerated Cost Recovery System, or MACRS depreciation, with all the benefits accelerated to year one.

At Paradise Energy, we are expert solar installation professionals, not accountants. We give the most accurate outlook we can base on the financial information provided to us by our customers, but before making any decisions on how to expense depreciation, we recommend checking with your accountant first.

A word to homeowners looking to go solar: depreciation is not generally allowed on residences unless it is considered a business expense.

Whether it’s three, five, seven, or ten years, your investment’s recovery period depends on the type of investment you make. Solar systems fall under the five-year schedule.

Is Depreciation Calculated Before or After the 26% Solar Tax Credit?

Because everything has a wonderful way of being simple and easy, the answer to this question is going to be either before or after, right? Not so much. The IRS reduces the basis for depreciation by one-half of the tax credit amount allowed. So if the tax credit is 26%, as it is in 2021, then the depreciable basis would be 87% of the total cost (100% - [26% X .5]). For example, if your solar system costs $100,000, you would be able to depreciate $87,000.

The Tax Cut and Jobs Act changed how we can depreciate solar on the federal level. With the new tax bill, businesses can now depreciate 100% of the cost basis in the first year. This 100% bonus depreciation allows you to accelerate all the federal tax benefits to immediately help offset installation costs.

An Example of Solar Depreciation Benefits

Let’s figure out the MACRS depreciation for a solar system that costs $300,000 before incentives. As long as you install this system in 2022, you’ll be able to take advantage of the Federal Solar Incentive Tax Credit at 26%. But since we have to calculate depreciation with half of the tax credit reducing the depreciable cost basis, we’ll have to take 13% off the cost of the system to get the basis of depreciation. We can do this by multiplying the cost by 87%, which gives us $261,000.

Next, you’ll need to know your federal and state tax brackets. For this example, we’ll use a 24% federal tax rate and a 7% state tax.

To calculate federal tax savings from depreciation, multiply the $261,000 by 24%. Because you can take advantage of 100% of this in the first year, you’ll enjoy $62,640 in tax savings the year that your solar system is placed into service.

That means the total savings from just depreciation would be $80,910. In this example, that’s just about 27% of the entire system’s cost!

You won’t get all of this in year one, but you will get most of it! With 100% bonus depreciation, you will receive all of the federal depreciation and the first year’s state depreciation according to the five-year MACRS schedule as follows:

82% of depreciation savings come during the year you place your system in service.

These are actual tax savings that will keep your payback period short and your ROI high. You’ll be able to use these savings to reduce a loan’s principal owed or reinvest in your company.

How Does This Compare to Investing in Other Equipment?

If you’re looking to invest in equipment for your farm or your business, there are plenty of options. Of course, you want to select the option that will give you the best return on your investment.

If you decide to invest in solar, you’ll enjoy paying less money to the utility while making a positive impact on the environment. But with 100% bonus depreciation, you also get all the benefits in year one, which can really help with installation costs.

We’ll compare two equally priced equipment investments: solar, and another equipment investment, say a machine that produces widgets. Both of these investments have an initial cost of $500,000. We’ll stick with the same tax rates as the previous example - 24% federal and 7% state. We’ll also assume the widget machine has the same depreciation schedule of five years for comparison's sake.

With half of the 26% tax credit deducted from the price, the solar system's basis for depreciation is $435,000, and the total savings from depreciation will be $134,850. The basis of depreciation for the widget machine is the full $500,000 for a savings of $155,000. But let’s take a look at the five-year depreciation schedule.

That’s money that can be reinvested elsewhere, or used towards the installation cost of your solar system.

While these numbers vary based on your federal and state tax rates, solar is an investment with a huge payback in year one. That huge payback can help you pay off your system, making your payback period much shorter and your ROI much higher. Learn more about the power of the time value of money here.

With accelerated depreciation, the 26% solar tax credit, SRECs, and grants, some commercial solar systems reach payback in as little as five years. That means at least 25 years of free electricity!

How Much do Solar Panels Cost in Virginia?

Virginia’s electricity rates are the sixth highest in the nation. That means you could be paying more for electricity than 86% of the