A Realtor's Guide To Listing a Property With a Solar System 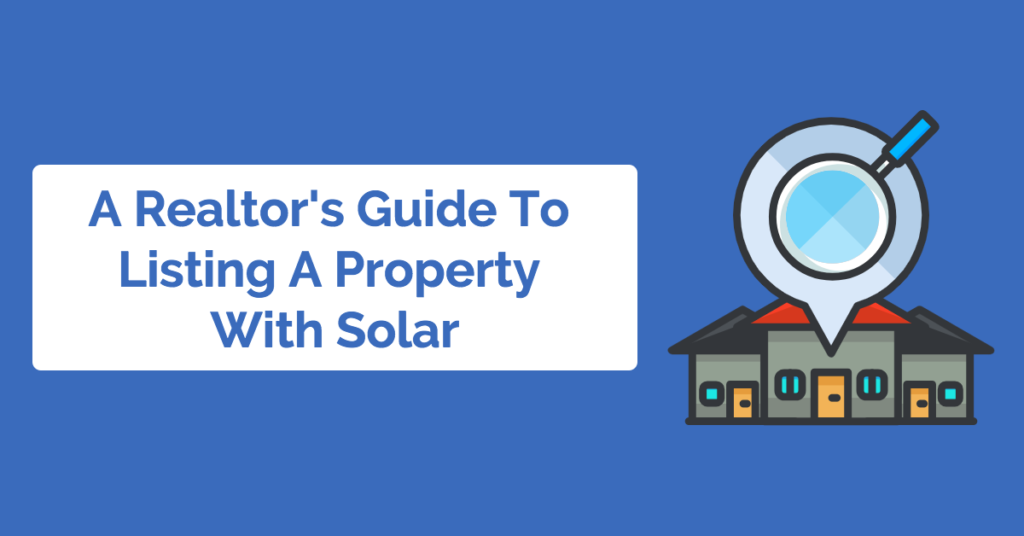 As a real estate agent, you have probably come across property listings with a solar energy system.  Whether you are representing the buyer, the seller, or acting as a dual agent, you will need to know the specifics of that solar system.  Are you prepared to discuss the pros and cons of solar ownership and solar leases with your clients?  Do you know if the solar system is an asset or a liability?  Do you know how to capture the value that solar photovoltaic (PV) systems add to the transaction?  This simple guide is designed to help you navigate the complexities of real estate listings with solar.

A Realtor's Guide to Property Listings with a Solar System.

Step 1: Find Out If The Solar System is Owned, leased, or a Power Purchase Agreement

When you purchase a solar system, you get a federal tax credit equal to 30% of the purchase price.  This is a dollar-for-dollar tax credit with the flexibility to carry it forward if you can’t use it in the current year.  In addition to the federal tax credit, businesses can depreciate the solar system giving them additional tax savings.  SRECs have the potential to be an ongoing revenue stream for the owner of those credits.   SREC markets are not available in all states, and SREC values fluctuate based on supply and demand.  One of the great benefits of solar ownership is the increase in property value.  According to a 2011 study by the National Bureau of Economic Research (NBER), the average solar energy system added 3% to 4% or approximately $22,500 to the average home’s value.

Another study by the Lawrence Berkely National Laboratory concluded that “home buyers consistently have been willing to pay more for a property with PV across a variety of states, housing and PV markets, and home types.  Average market premiums across the full sample of homes analyzed here are about $4/W or $15,000 for an average-sized 3.6kW PV system.”   See figure 1.1 below.  While there is a slight variance between the two studies, there’s no doubt that solar ownership increases the value of a property and that buyers are willing to pay more for homes with solar ownership.  As a general rule of thumb, solar increases the property value by the net cost of the solar system (total purchase price minus the incentives).

If you have a listing where the solar is owned, free and clear of loans and/or financing, then the solar system is an asset to the transaction for the following reasons: 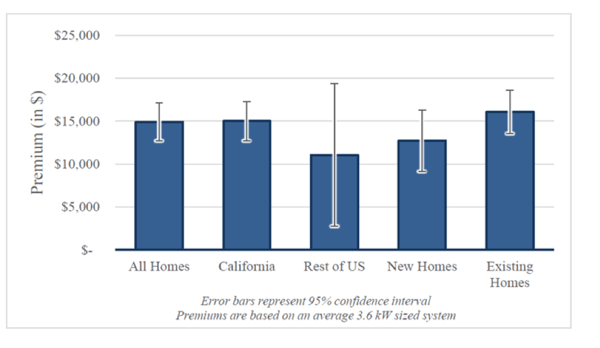 Leases and PPAs have been attractive to solar buyers primarily because they allow property owners to go solar with little or no money down.  A third party pays for and owns the solar system and in turn, sells the electricity to the property owner at a pre-determined rate.  They usually have an attractive introductory rate equal to, or in some cases, even less than, their current electric rate.  This is attractive up front, but they almost always include inflation escalators equal to or higher than the actual inflation of electric rates.  Furthermore, these agreements are usually long-term agreements ranging from 20 to 30 years.

The next step in the process is to determine the size of the system, the production of the system, and the savings from the system.  For this particular step, we recommend using the Listing A Property With Solar Worksheet.  The best way to capture this data is from the paperwork received from the company that installed the solar system.  The original solar installer should have included the size of the system, the projected annual production in kilowatt-hours, as well as the avoided cost of electricity per kilowatt hour.  If this information is unavailable, you can calculate the size of the system by multiplying the number of solar panels by the wattage of each panel.  For example, a solar system with 30 panels that are 300 watts per panel will be a (30 x 300 = 9,000) 9,000 watts or a 9-kilowatt system.  The next step in would be to calculate the annual production of the solar system.  There are many variables that go into calculating production, such as the amount of shade, the orientation of the solar panels, the tilt of the roof, etc., which make calculating the production more challenging.  As a general rule of thumb, assuming little to no shade, the solar system will generate approximately 120% of the total watts of the system.  For example, a 9,000-watt system would generate approximately 10,800-kilowatt hours (kWh) per year.  Once you know the projected annual production, it is relatively easy to calculate the annual savings by multiplying the kilowatt hours by the avoided cost of electricity.  For example, 10,800 kWh X $0.14 = $1,512 in annual savings.

Here is the recommended message:

Solar Ownership Messaging
This property includes a 9 kW solar system that generates over 10,000-kilowatt hours per year.  The utility bill for this house is $12 per month.  This solar system saves the owner approximately $1,500 per year.  The solar system is still under warranty, and all warranties transfer to the new owner.

Summary
If the solar system is under a power purchase agreement or lease agreement, it is likely that the system does not add value to the property.  Furthermore, PPA or lease agreements will also add challenges to the transactions, including finding a buyer that will assume the agreement along with increased costs.  Solar ownership, on the other hand, increases the property value, lowers the utility bills, and could help you sell the property more expeditiously. 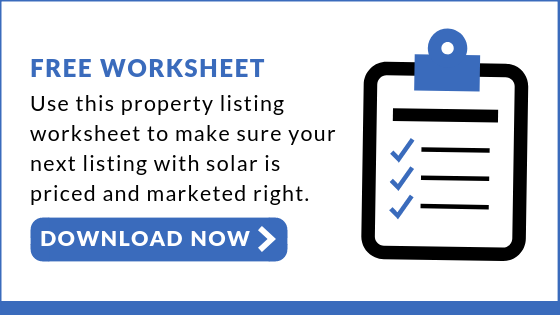