NFL Stadiums That Are Scoring Big With Solar Energy 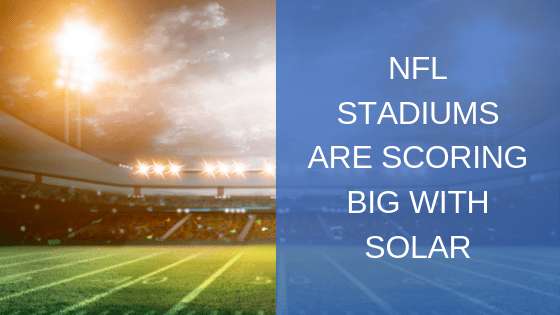 If you’re like me, you circle September on your calendar each year. School is back in session, the weather is getting cooler, and the lull of summer sports is over. Football season is here!

This is an exciting time of year for many. Large groups of people will fill NFL stadiums all over the country every fall Sunday. Though the main focus of each football fan is on what happens between the pylons, there is a lot that goes on behind the scenes to make each game day experience a success. There’s food to prepare, scoreboards, sound systems, and lights to power, club boxes to keep climate controlled, and much more. All of this, if not managed properly, can use a lot of electricity and be costly to maintain.

The NFL and many of its members take sustainability very seriously. Some stadiums have achieved LEED certification (Leadership in Energy and Environmental Design), and all of them in some form have implemented sustainable practices to conserve energy, reduce water usage, and minimize waste.

For this blog, we’re highlighting five NFL stadiums that are energizing their gamedays with solar.

5 NFL Stadiums That Are Leading The Way With Solar

Home to the Philadelphia Eagles, Lincoln Financial Field has consistently made sustainable improvements since its opening in 2003 and is now a LEED Certified stadium. The improvement you will notice first as you approach the stadium is its 3,000 kW solar system. Drive by the stadium on Interstate 95 and you will see panels hanging on the side of the stadium. Park in Lot K and you will enjoy tailgating in the shade under the 16-row solar car-port. 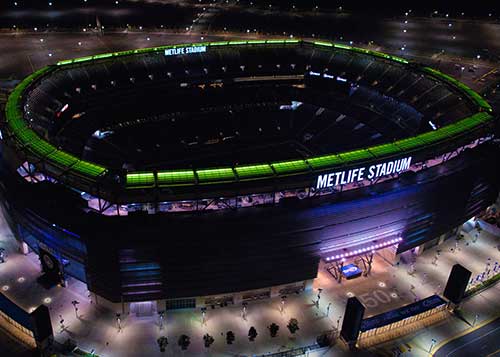 A few miles across the Hudson River from New York City is the home of the New York Giants and New York Jets. MetLife Stadium opened in 2010 with an innovative roof lined with solar panels. The 350 kW solar system produces enough energy to meet the stadium’s daily energy needs. 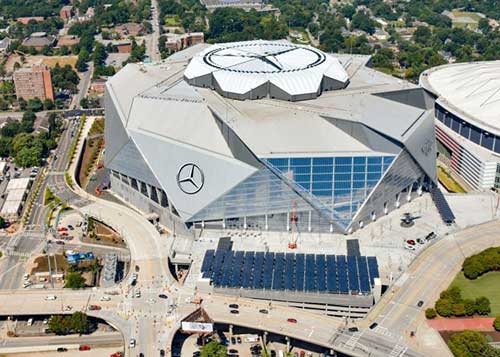 West of downtown Atlanta is the first U.S. professional sports stadium to achieve LEED Platinum. Designed with sustainability in mind, the home of the Atlanta Falcons is powered by 4,000 solar panels. You will find the panels at the parking lot near the corner of Gray St and Ivan Allen Jr Blvd, atop stadium entrances, and on the roof of the nearby Georgia World Congress Center. 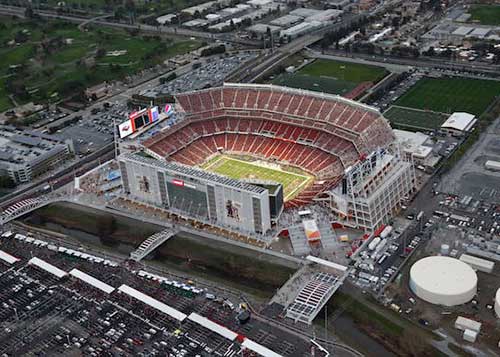 Levi Stadium takes the cake for one of the most unique solar installations. The west side of the San Franciso 49ers home is the NRG Solar Terrace with 1,186 solar panels. In addition, the stadium’s main parking areas are connected to the stadium with three solar bridges totaling 375 kW of solar. 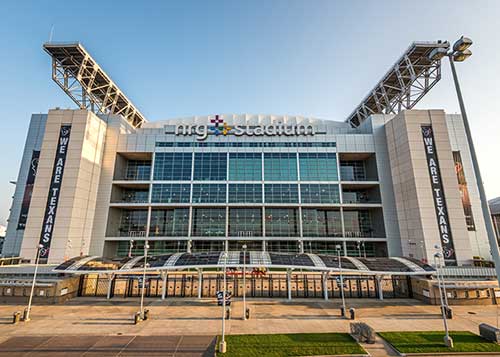 Houston is hot so what better way to shield Houston Texan fans from the sun than a solar pedestrian bridge? Spread out between a pedestrian bridge and a weatherproof canopy at the main entrance, NRG Stadium is home to 600 solar panels making a 180 kW system.

These are just five of the stadiums powering their gamedays with solar. Many other teams throughout the league, including Gillette Stadium and CenturyLink Field, are capitalizing on solar’s economic and environmental benefits. Be on the lookout for solar when you attend your next NFL game.

If you're interested in adding solar to your home or business like your favorite NFL team, check out this article 4 Ways to Tell If Solar Is Right for You. It'll tell you what factors you should consider when determining whether or not solar could be helpful to you.

Andy is approaching his third year of working in the solar industry and has completed Solar PV101 training through Solar Energy International. He serves as the Marketing Manager at Paradise Energy Solutions, working from our corporate headquarters in Paradise, PA.

2019 Year in Review
What Are The Best Solar Panels On The Market?

Get Our Updates by Email