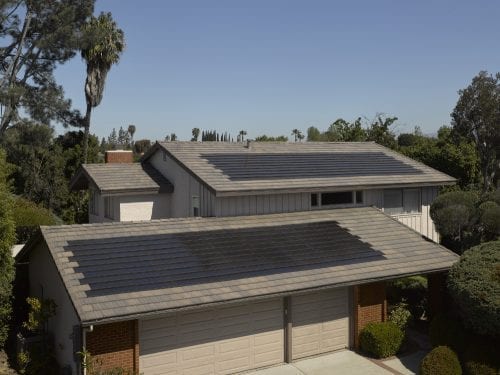 Over the last decade, there has been significant hype around the idea of solar roofs or solar shingles. The primary benefits are their superior aesthetics and their ability to combine roof coverings and solar panels into one product.

But despite the backing of big-name brands like Tesla, solar shingles remain a niche product. The first public solar shingle installation was in 2011, and over a decade later, they still count for a small fraction of overall solar energy installations.

What Are Solar Shingles?

Solar shingles are a hybrid of two building materials—a roof covering and a renewable energy system.

Like any other roofing shingle, solar shingles protect your house from the elements. Installed to the house roof sheathing in place of traditional roofing shingles, they stand up to rain, wind, and hail to keep your building dry and comfortable.

But unlike other roofing materials, solar shingles generate electricity with energy from the sun. They can replace conventional solar panels, which are installed above a traditional roof covering via a sturdy racking system.

How Do Solar Roof Shingles Work?

For the most part, solar shingles are just smaller, thinner versions of traditional photovoltaic (PV) solar panels. Crystallized silicon is used as a conductive material to create solar cells, which in turn generate electricity from the sun’s energy.

That energy is then transferred to an inverter for conditioning into AC electricity, which is then sent to a distribution panel for use.

How Much Do Solar Shingles Cost?

But despite this efficiency, solar shingles remain the more expensive option in most situations. In your research, you may see other solar or roofing companies sharing that solar shingles are right on par with the cost of a traditional solar system and a new roof. This is likely the case for several brands and installers, but you'll be paying much more for premium options like Tesla’s solar roof.

It’s also worth noting you don’t necessarily need a brand new roof to install traditional solar panels. As long as the roof is in good shape and in the early stages of its life, your solar panels can be installed right on top of the existing roof.

There’s no arguing that installing a traditional solar system (without a new roof) is the most affordable option. If, however, your roof is showing significant signs of aging, a new roof may be needed before panels can be installed.

Can I Use the Solar Investment Tax Credit with Solar Shingles?

You should be able to claim the 30% solar investment tax credit from the federal government for the solar portion of the roofing system. Note that it may not cover certain roofing-related expenses, however.

This tax credit has been a popular way to lower the cost of all types of solar installations, allowing you to recoup 30% of the installation costs the year the system is placed in service.

How Efficient Are Solar Roof Tiles?

Most solar roof products are 11-16% efficient. In contrast, traditional solar panels have an average efficiency of around 18%. Higher-quality solar panels can have efficiencies upwards of 20%, with the most efficient panel widely available being 22.8% efficient.

Why does efficiency matter? In short, the more efficient your panels are, the more free electricity your system can produce. Panels or shingles that are less efficient mean you’ll need more roof space to produce the same amount of electricity.

In addition to efficiency, solar shingles are at another disadvantage regarding the amount of electricity produced. Because solar shingles are installed directly against the roof sheathing, there is less airflow around the solar cells, resulting in higher temperatures, lower efficiencies, and less production.

Traditional rooftop panels are installed on a racking system, sitting a few inches above the roof itself. This small gap allows air to flow below the panels, helping to cool them, and improving efficiency and production.

Most solar shingles are backed by a 20- to 25-year manufacturer’s warranty. This is in line with many traditional solar panel warranties, ranging from 20 to 30 years.

However, an ongoing challenge with a solar roof is maintenance. While a traditional solar panel can be easily replaced in the case of a product failure, replacing a failed part of a solar roof would be more challenging due to the interlocking installation. Fixing one shingle could require the removal of an entire section of panels.

Solar Shingles vs. Solar Panels: Which is best?

So, what is the better way to go between these two types of solar panels? It all comes down to what your priorities are. 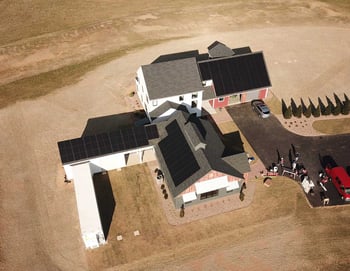 If your roof is in relatively good shape and you’re looking to save money, traditional solar panels may be better. They’re more efficient and can generate more free electricity with the same space. And while there are several options for the color and looks of your panels, they won’t blend in as well as solar shingles.

At Paradise Energy Solutions, we currently believe that traditional solar panels serve our customers with the best combination of price, production, and durability. We are constantly researching new products to ensure we are offering the best available solutions.

A Non-Profit's Guide to Solar Energy