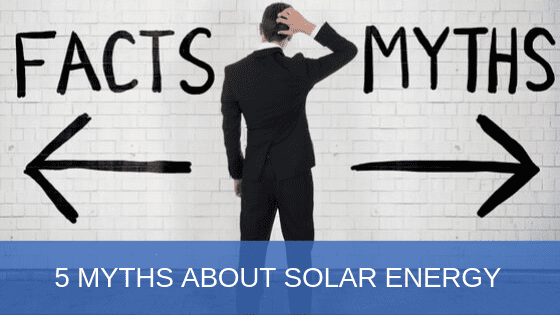 There’s a lot of misleading information on the internet, and no topic is safe, including renewable energy.

We’ve seen information about solar energy that’s speculative at best to things that are flat out false. These myths fall on both sides of the spectrum - from solar naysayers manipulating information to make solar look bad, to solar proponents who overstate its benefits.

And as a solar installer, we’re surely a proponent for solar. But we genuinely believe solar has enough actual benefits that there’s no need to twist the information to make solar sound better than it is.

If you’re considering investing your hard-earned money in a solar energy system, it’s essential you get truthful, accurate information. In this blog, we’re here to set the record straight on the most common solar energy myths and scams, so you can make an informed decision.

If you see an ad or a company reaches out to you claiming the government is giving away free solar panels, it’s a major red flag.

Free solar panels from the government, or really anyone, for that matter, don’t exist.

In most instances, these businesses use misleading information to get your personal information which they then sell to solar installers. These installers will then start reaching out to you to try and sell you solar. This is wrong, and at Paradise Energy, we don’t buy those types of leads.

While the government (or anyone else for that matter) is not giving away free solar panels, they do offer incentives that make installing solar panels more affordable. The most widely available is the solar investment tax credit from the federal government. This credit saves you 26% of the cost of your overall solar energy system.

Other common incentives include accelerated depreciation (businesses only) and the USDA REAP Grant (for farms/rural properties). Some states also offer specific incentives as well.

One way your solar system could be somewhat perceived as free is if you opt for a solar lease or power purchase agreement (PPA), opposed to solar system ownership. With a lease or PPA, you’ll be leasing a portion of your land, or your roof, to a solar panel developer. The developer will install solar power on the leased property, and sell the electricity generated back to you.

With a lease of PPA, you’re not installing the panels - the developer is. That means you don’t have to pay for the materials or the installation costs, the developer does. However, you do have to purchase electricity from the developer at an agreed upon rate, so you’ll still have an electric bill - you just will be paying a different company. Additionally, the developer gets all the tax-saving incentives from installing the system.

So while a PPA or lease allows you to get solar on your property without an upfront cost, it isn’t technically free since you still have to pay for the electricity it generates, and you don’t get to own the solar system.

You may have heard that solar panels are toxic or harmful, and that is a valid concern. If you’re putting solar panels on your roof or property, you want to be sure that by doing so you’re not putting anyone in harm’s way.

That said, there is no evidence to suggest solar panels are toxic or harmful.

There are two main types of solar panels installed today. Both utilize the tried-and-true photovoltaic (PV) technology. These two types are panels made with silicon cells and panels made with thin cells.

The most popular are panels that use silicon cells. They are composed of a backsheet, a front sheet of glass, and thin silicon wafers. Most of these panels are encased with a metal frame.

Silicon is a safe, stable, non-toxic material. It has many applications in our daily lives, from the bricks and cement that make up our buildings to our cell phones and computers. While there is a small amount of lead in the wiring of your solar panels, this should never leak out and cause harm to a well-constructed solar panel.

Essentially, all the materials found in solar panels are also found in everyday objects like our phones and computers. We’re physically much closer to these items and interact with them much more than we would solar panels.

Thin film, on the other hand, is made with known toxic materials cadmium and telluride. While thin film panels are generally regarded as safe, they’re not often installed on small- to medium-sized homes solar energy systems.

It’s also worthwhile to take a look at what toxic chemicals other energy sources release into the air and water. Coal, in particular, is responsible for much more heavy metal pollution that solar.

In a paper released by the Physicians for Social Responsibility, it’s stated that burning coal to produce electricity creates coal ash, which releases arsenic, lead, mercury, cadmium, chromium, and selenium into the air. And there’s a lot of this going on in America. After mining wastes, coal ash is the next largest stream of industrial waste.

When it comes to solar panels themselves, the amount of electromagnetic frequencies (EMFs) that they emit is very low. However, smart meters and inverters can emit more significant levels of EMFs, though they are well within FCC standards.

There is no evidence to date that conclusively suggests a causal relationship between electromagnetic radiation negative health impacts. For more reading on this, check out this Fact Sheet by the World Health Organization.

Your solar system’s return on investment comes from generating free electricity you can use to power your home, business, or farm, as opposed to paying the utility for energy. That means the higher the electricity rates are, the more money you’ll save with solar.

In general, we expect electricity rates to rise over time. As our demand for electricity increases, utility companies need to create more infrastructure to support the increased demand, which is a cost they need to pass on to the consumer. And electricity rates are also subject to typical inflation.

If you’d like to take a look at the year-by-year changes of your electricity rates, visit the EIA’s State Electricity Profiles.

It’s easy to fall into the trap of thinking high-efficiency panels mean high-quality panels. And while this can certainly be the case (for example, LG Solar), it isn’t a hard and fast rule.

When choosing the best solar panels for your system, efficiency is just one of the things you want to take a look at. Work performance, warranties, panel degradation, and all factors that can matter just as much as efficiency. And in addition to the panels themselves, the solar company designing and installing your system can also have a huge impact on how much electricity your system ultimately produces.

In addition, the highest-efficiency panels are often the most expensive panels. While one can argue that the more efficient solar panels are, the fewer you’ll need to install, in most cases, this won’t be cheaper than installing a few more lower-efficiency, lower-cost panels.

That said, if you’re limited on space and you need to optimize kilowatt-hours per square foot, high-efficiency panels can make more sense.

When it comes down to it, it will be your call. Most solar installers should default to the option that is the best combination of cost and electricity production. However, if installing high-efficiency panels is important to you, you can certainly request that they quote them for you. That way, you can compare their recommended panels with the panels you had in mind to see which option is best for you.

Myth #5: I Don’t Get Enough Sun for Solar

It goes without saying solar energy depends on sunlight to create electricity. Given that, it’s not a huge leap to assume you need a lot of sunlight to make solar worthwhile. But that’s not necessarily true.

There are a lot of factors that go into solar panel production, not just how much sunshine your area gets.

We’ve seen systems in Upstate New York, an area notorious for snow, and northern Ohio, one of the cloudiest areas of the country, both being very profitable investments for their owners.

And the good news is you won’t be making this investment blindly. Your solar installer should provide a reasonably accurate estimate on how much electricity your system will produce, taking into account the amount of sunshine your area receives. If you want further assurance on the payback of your system, look for a solar installer that guarantees the production of the solar systems they install.

Make Your Solar Decision with the Right Information

When researching solar energy, keep an eye out for solar energy scams and misinformation. Make sure you cross-reference everything you see with trusted, well-referenced sources. If something sounds too good to be true, it probably is.

Despite all the misleading information, solar can be a fantastic investment for homes, businesses, and farms to reduce a monthly bill and their impact on the environment.